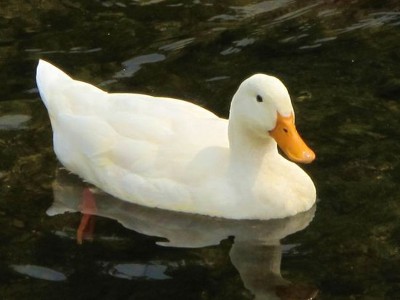 German Pekin Ducks are one among the most gregarious and affectionate of all domestic ducks. In the United States Duck breeders call this duck Donald Duck. This is because Walt Disney developed the characters of this cartoon character from the behavior of the German Pekin Duck.

The German Pekin Ducks are similar to small Runner Ducks with fairly an upright posture, but they boast a slender chubby look. However, this duck breed is not as vertical as the Pekin duck breed of Europe. They are the ideal cartoon of a duck with a vivid yellow color bill, orange color shanks and toes. Moreover, the ducklings of this duck breed appear with a brilliant yellow color. These duck breeds are fairly common and have turned out to be extremely popular to farmhouse as they develop quite rapidly.

German Pekin Ducks have the vertical carriage, almost similar to an Indian Runner duck or a penguin, with a lemon yellow hint to their plumage. The German Pekin Ducks turn out to be active during late January and they usually start laying consistent shape and size eggs around March up to late July.

A German Pekin Duck is a Precocial (meaning) Born or hatched with the eyes open, a covering of hair or down, capable of a high degree of independent activity from birth and able to leave the nest just a few hours after hatching.

German Pekin Ducks are most celebrated for its commercial application, emerging on food menus of China all over the world. Actually, the majority of the duck meat produced in the United Kingdom is from a hybrid cross between the German Pekin Duck and the Aylesbury duck. These ducks are regularly used for the reason that they make a high-quality tender meat when they attain the age of eight weeks.

Usually, a well grown adult male German Pekin Duck is heavier than the female ducks, with a maximum body mass of (4.1 kg), whereas the female ones weigh (3.6 kg). The feathers of these ducks are fairly soft, and appear in cream color. The bill and legs of the German Pekin Duck breed appear in a bright orange color. Underneath the water-proof coat are downy soft fluffy feathers which keep the ducks body warm. German Pekin Ducks keep clean by being able to turn their heads completely backwards, and put their beaks into their feathers by preening themselves.

German Pekin Ducks see in color with very good vision and can see well underwater. German Pekin Ducks have three eyelids the third eyelid called nictitating membrane. They have a top and bottom as well as a third eyelid that is found on the side of the eye. The German Pekin Ducks eyelid blinking acts as a windshield wiper to clear the eye. This helps to see when diving under water can also help the eye from drying out while flying. This is an act of constantly cleaning and keeping the eye moist.

Ducks fly will fly in a “V” shape to makes flying easier.
In captivity ducks will lay more eggs, when there is more daylight, that's why farmers will keep the lights on in the ducks house for longer periods of time.

Scientific name for German Pekin Duck "Anas Platyrhynchos" meaning - Wild dabbling duck from which domestic ducks are descended; widely distributed. From New Latin "anas" meaning (Duck) and the word Platyrhynchos comes from "platyrrhine", Ancient Greek meaning (broad snouted, flat-bridged nose).
German Pekin Ducks are birds in the Class of "Aves". Ducks of all types are part of the bird family "Anatidae". German Pekin Ducks are also called "waterfowls" they are generally found in places were there is water, such as ponds, rivers, streams, lakes and occasionally your back yard pool. The definition of Anatidaephobia is irrational fear that you are being watched by a duck.

A special feature that the German Pekin Duck has is its water-proof feathers, even when the duck dives underwater, its downy under-layer of feathers will stay totally 100% dry. There is a special gland called the "Preen Gland" also called Oil Gland or Uropygial, that produces oil that is near the duck's tail which covers and spreads the outer coat of the German Pekin Ducks feathers, which makes the duck water-proof.

A "bill" is what is call a German Pekin Ducks mouth. There are no teeth in the ducks bill, they have rows of thin bristles, which helps them to filter pieces of nutrition out of the water. German Pekin Ducks swallow there food whole and it goes to an organ called a gizzard, were the food is first ground up and than moves on to the stomach. The different bill shapes and sizes for finding food, has over time mutated to fit each environment. The German Pekin Ducks bill is flat and broad and has rows of fine incision along the outer edge called "lamellae". meaning a thin membrane, plate, scale or layer, as of cell wall or bone tissue. The larnellae helps the duck to clutch food for feeding.

Search the Web for More information on German Pekin Duck at LookSeek.com Search