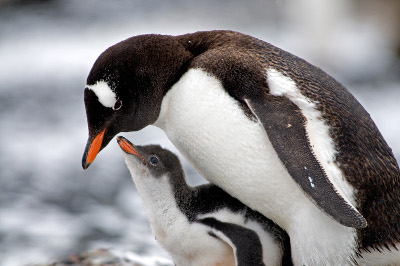 Features of the Gentoo Penguin

Region of the Gentoo Penguin

Circumpolar in Antarctic peninsula and sub-Antarctic Islands waters is were you find the Gentoo Penguin. They tend to breed on ice-free grounds. There are subspecies of the Gentoo Penguin, they are Pygoscelis papua papua breed and is mainly found on the Kerugulen, Macquarie, South Georgia, Falkland Islands, Heard and Staten Islands and the other one Pygoscelis papua ellsworthi breed is found on the Antarctic Peninsula, South Sandwich Islands, South Shetland Island and south orkney islands.

Diet of the Gentoo Penguin

The Gentoo penguin is a Carnivore. Gentoo penguins mainly survive on crustaceans like squid, krill and fish whenever available. They are known to be opportunistic feeders that feed on what they can find readily. Gentoo Penguin don't drink water, since they take in seawater as they swallow their meal and like all penguins, they have a that special gland that removes salt from their bodies after swallowing saltwater.

Reproduction of the Gentoo penguin

Gentoo penguins breed on ice free surfaces and like all other penguins they breed in colonies. These penguins may often nest between grass tufts as well as on shallow areas of the coast. Their incubation period is between 34 – 36 days and chicks are nested for not less than 30 days before being released into the creche. The incubation is shared between the male and female Gentoo Penguin and they change turns daily.

About the Gentoo penguin

The Gentoo Penguin is the fastest of all penguins in swimming covering up to 36km/ph an equivalence of 22 mph/ph. They can make over 400 dives a day for food. This species is adapted to very harsh cold climactic conditions.

"Scientific name for Penguin Sphenisciformes". This scientific name was given to the penguins because when they walk the long tail sticks out and sweeps from side to side.

Search the Web for More information on Gentoo Penguin at LookSeek.com Search