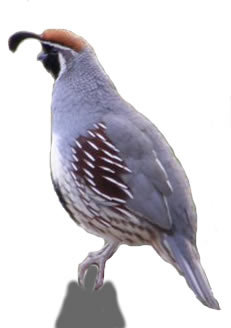 The Gambles Quail range is the southwestern United States and parts of Mexico with a habitat of arid desert scrub.

Males have a black top-knot plume. Male Gambel's can be distinguished by having no scaling on the lower breast, but having a yellowish belly with a large black spot. The top of the head is rusty brown with a white border and a black face, forehead and chin; the back and upper breast is grayish brown with rusty brown flanks that have white streaks.
Richly patterned in gray, chestnut, and cream that can serve as excellent camouflage. Males have a bright rufous crest, chestnut flanks striped with white, and creamy belly with black patch. Females are grayer, lacking the strong head pattern.

Females also have a top-knot, but it is much smaller in size. Her overall coloration is similar to the male, but she lacks the black and white face, the black breast spot and the rust color on her is much lighter. The hen is also slightly smaller than the male.

Gambel's quail eat seeds of forbs, grasses, shrubs, trees and cacti as well as herbaceous material, fruits and berries. They are ground feeders, generally seeking food in the morning and afternoon.
In the winter Gambel's Quail form large groups or coveys. During the spring, these large flocks break up and the males begin to draw females to their choosen territory.
Females select nest sites, which are almost always located on the ground and usually concealed or protected by foliage. The typical nest is a shallow, bowl-shaped scrape, lined with grass, leaves and feathers. Clutches of 10 to 12 white to buff eggs hatch three weeks after laying, usually peaking in late April or May.

Incubation: The temperature for gambles quail is 99.5°F for forced air incubators and 102°F for still-air incubators. The humidity for gambles quail should be about 60% (86° wet bulb) for the first 20 days of incubation. On the last three days the humidity should b raised to about 75% (92° wet bulb).
The eggs should be turned at least 3 times per day to prevent the embryonic membranes from sticking to the shell.
If you are turning the eggs by hand you should use a soft lead pencil to mark an x on one side and an o on the other. This will help you make sure all eggs have been turned. Stop turning the eggs 3 days before the eggs are to hatch, for gambles that is on day 21

Search the Web for More information on Gambles Quail at LookSeek.com Search