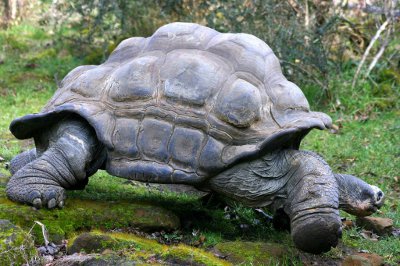 The Galapagos tortoises are endangered and their number has been decreasing by day. This is because their meat and oil is preferred by humans who in turn kill them. The Galapagos tortoise habitats have been cleared too to pave way for agriculture. In fact it is noted that they rarely survive in the wilderness. Efforts are being made to conserve them especially by keeping them in captivity.

Galapagos tortoises have a large bony shell that is dull brown in color. Their shell segment has patterns throughout their life. Lichens are believed to grow on their shell since they are slow moving animals. Lichens mostly grow on rocks.

The legs are large, have scaly skin and hard scales. The fore legs have five claws whereas the hind legs have four. One would think that the Galapagos tortoise are deaf but in actual sense they are not. It is always hard for them to hear a person coming from behind but once you pass, they will take their head and legs in their shell.

Galapagos mating season can be any time of the year. But it has seasonal peaks which are believed to be between February and June in the rainy season. When the males meet for mating reasons, they normally face each other displaying their dominance. The Galapagos tortoise stand, stretch their necks and open their mouths. If need be, they bite each other and the short tortoises are the ones that suffers. The dominance is seen especially for the species that have longer necks because they are more aggressive. In most cases, the weaker ones back off.

The male Galapagos tortoise forcefully ram the female making very loud noises that are common only in mating season. After mating the females travel for several kilometers (Miles) in July all the way to November to nesting places. They just dig a 30 cm (11 to 12 inches) deep cylindrical hole that they use to deposit their eggs. Up to sixteen spherical and hard shelled eggs are laid. The eggs are around 2.9 to 5.5 ounces (82 to 157 grams) and they are a size of a billiard ball.

The hatch-lings hatch after eight months and the Galapagos tortoise are supposed to dig their way up. There are some that die underground. Hatchling's embryo sap can contain them up to seven months.

Search the Web for More information on Galapagos Tortoise at LookSeek.com Search