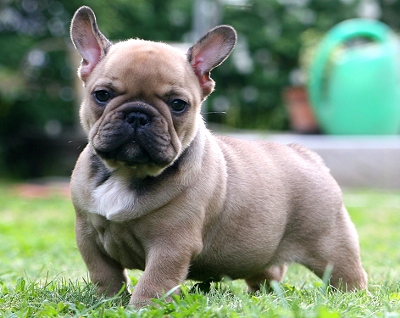 Facts about French Bulldogs, "Scientific name for French Bulldog, or domestic canine, is Canis lupus familiaris". The French Bulldog, don’t be fooled by its name it originated from Nottingham in England in the 19th century. They wanted to make a smaller, lap version of the common English bulldog. Eventually the toy bulldog became so popular in France that they acquired the name “French Bulldog” and even the British were never happy with the French name being added to the breed that actually originated in England the name stuck.

French Bulldogs sweat glands are between their paw pads.
Facts a French Bulldog sees in color and have better low light vision. French Bulldogs have three eyelids, a lower lid, an upper eyelid lid and a third lid, that is called a haw or nictitating membrane, this keeps the French Bulldogs eye protected and moist. French Bulldogs eyes have a special membrane for seeing better at night, called a tapetum lucidum - a dogs reflective layer in the choroid chiefly of nocturnal, causing the eyes to glow when light at night hits the eyes and they consist of some layers of smooth flat cells covered by a section of double deformed crystals.

French Bulldog needs walks on a daily basis, it should be made to heel behind or beside the person walking it. The French Bulldog love to run and play around this should cater for the exercising part.

The number one heath problems amongst French Bulldogs is obesity, so always make sure your dog doesn't get to fat. Many foot problems that French Bulldogs have are just an issue of long toenails. The French Bulldog are prone to joint diseases, the spinal disorders, eye problems, Elongated Soft Palate, Cleft Palate, (VWD) Von Willebrand's Disease, (IVDD) Intervertebral Disc Disease, Brachycephalic Syndrome, Patellar Luxation, Hemivertebrae and heart defects. The French Bulldog often deliver through cesarean section because the young ones have quite a large head.

The French Bulldog will need very little grooming, just regular brushing is enough. The dog is an average shedder.
If purchasing a French Bulldog from a breeder, make sure to find a good breeder with references check at least two to three of the puppies that were purchased from this breeder.
The French Bulldog is a Non-Sporting Group that in 1898 was recognized by (AKC) American Kennel Club.

A French Bulldog’s mouth can apply approximately 150 to 200 pounds of pressure per square inch and an American Pit Bull Terrier, German Shepherd Dog and a rottweiler can have 320 LBS of pressure on avg.

Search the Web for More information on French Bull Dog at LookSeek.com Search