Back To Category Toad
Title : 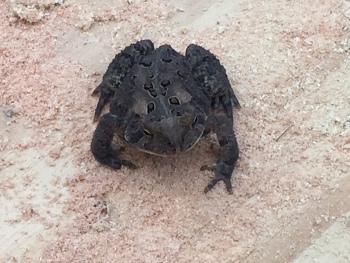 The Fowler's Toad prefers habitats include meadows, beaches, woodlands and sand prairies. In hot dry weather, the toads will burrow into the ground to prevent drying out. They are not territorial and will share their space with several other toads although they prefer to live a solitary life. In the wild, the Fowler's Toads live up to five years.

Fowler's Toad are preyed upon by snakes, birds and small mammals. As a defense, they secrete a toxin from the glands on their backs that is noxious to most predators, and fatal to some. It will also "play dead" if threatened, but prefers to use camouflage as its primary defense mechanism.

Breeding of the Fowler's Toad occurs most of the summer from March into August in ponds, streams, and other pools of water. The female Fowler's Toad will lay an average of 3,700 eggs, which take a week to hatch. The larval stage lasts for 40 to 60 days depending on environmental conditions. The tadpoles of the Fowler's Toad eat mainly plant material. Young adults look very similar to full-grown toads.

Fowler's toads seem to hibernate longer than American toads, going into hibernation as early as September and lasting as long as March.

Search the Web for More information on Fowlers Toad at LookSeek.com Search