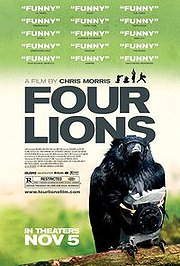 Four Lions is the story of a group of British jihadists, and their attempt to be martyrs, by causing a terrorist attack in Britain. These group of men dream of being terrorists, but unfortunately they are also bumbling idiots.

Christopher Morris, who wrote and directed this film, took this touchy subject and made a compelling, quick witted, well made, and hysterical movie. If this exact story were incorporated into any other subject it would have been a so-so movie weave all seen before. This film does not make fun of their beliefs, just the extreme lengths that they take. A film like this could never be made in the U.S. and thank god it wasn't. This is through and through a British black comedy, and it's the twisted dark sense of humor that makes it work.

All I can say is I laughed my ass off. These guys are trying their hardest to do what they believe in the right thing to do, and despite the horrific attack they are planning you start to sympathize with them. Yes as ludicrous as this may sound it is true. There is one scene where Omar (Riz Ahmed, who is great) is telling his son a bedtime story about 'Simba's Jihad', it is so absurd it is actually touching. You begin to see that the people in this Terrorist Cell� as just regular guys who are likable, and yet only human.

I recommend this movie, but be forewarned this last 10 minutes gets really dark. This is not your typical adult comedy. This movie is rated R for a reason.