Back To Category Ford
Title : 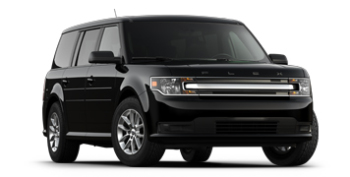 The Ford Flex was first rolled out in 2009 as a replacement to the Ford Taurus; the Taurus was made from 2005 to 2009. The second generation of the Ford Flex car came out in 2012. A more powerful engine and driver assistance features like automated parking systems became available.

The Ford Flex rivals a minivan on space with three rows. The Ford Flex seats seven unless you pay extra for 2 captain seats in the second row, at which point, it seats six. The Ford Flex is built on the Ford D4 platform.
The Ford Flex is available with a 3.5 liter 287 horsepower V6 engine and V6 turbo engine that puts out 365 horsepower. The standard transmission is a 6 speed automatic. An Ecoboost engine is optional. The Ecoboost engine is a V6 3.5 liter engine with 365 horsepower, and it is only available on the Limited trim line.
There are three time lines: SE, SEL and Limited. The SE trim line comes with rear parking sensors, the Ford Sync voice command system, a basic stereo system, and heated mirrors. The SEL or intermediate level trim line adds dual zone climate control, the touch screen interface, heated front seats, and more speakers for the sound system. The Limited or premium trim line engine is all wheel drive; for the other trim lines, all wheel drive costs extra over the front wheel drive standard. The Ford Flex Limited trim line comes with keyless ignition, blind spot warning system, power lift-gate, navigation system, and HD radio.

The Ford Flex gets around 18 miles per gallon in the city and 25 miles per gallon on the highway.
JD Power and Associates rated the 2015 Ford Flex as average on reliability.
In 2014, there was a recall for the Ford Flex due to problems with the airbag sensors for the passenger seats, power train, and axle shafts. A 2014 recall was issued for the right hand half shaft that could interfere with drive function; this applied to 2012 through 2014 model year Ford Flex cars as well as the Lincoln MKX.
A recall for the 2013 Ford Flex was issued for possibly leaky fuel tanks.

Search the Web for More information on Ford Flex at LookSeek.com Search