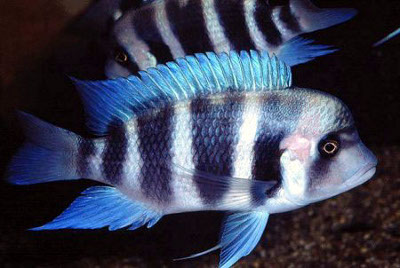 The species name of the Frontosa Cichlid is Cyphotilapia frontosa. The species is sometimes called Paratilapia frontosa. Fontosa Cichlids are native to northern half of Lake Tanganyika in Africa. Cyphotilapia gibberosa, a related species, fills the same niche in the southern end of the lake.
The Frontosa Cichlid has a light or dark blue body, black or gray stripes and blue fins. They have six or seven stripes. Both males and females develop a hump over the eye.
Cichlids are semi-aggressive and will eat any fish that fits in their mouths. They are carnivores. You can feed cichlids in your tank flaked food, pellet food, freeze dried plankton or krill. They can share a tank with plants, but those are incidental. They are territorial. Their tanks need small rocks and a sandy bottom, and caves to hide in are ideal. If the fish does not have a cave to live in, it will become more aggressive and attack other fish.
They need to live in tanks that are 70 gallons or larger. The ideal group is one male with several females. However, if you have more than one male, you will need a 150 gallon tank if not a larger one. Keep the water around 80 F. The pH should be 7.8 to 9.0.
The largest members of the species can reach a foot in length. Fontosa Cichlids are a delicacy in Africa. This is because they live ninety to a hundred and fifty feet under the surface and stay away from shore. They will rise to shallower waters to feed on shoaling fish.
Fontosa Cichlids are mouth brooders. After the eggs are laid, the female carries the eggs in her mouth for three to four weeks. After the fry hatch, she may still carry the fry in her mouth in times of danger.
Males and females are the same size and have the same coloring. In some males, the hump is more pronounced but this is not universal.
Fontosa Cichlids have been documented to live as long as 25 years in captivity.