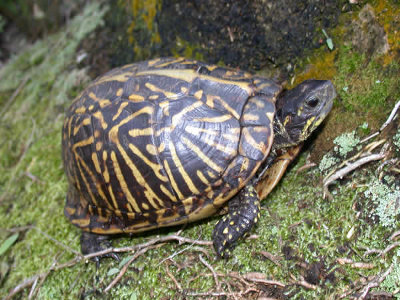 Facts about Florida Box Turtle. The Florida Box Turtle is a medium sized turtle, mainly found in Florida and can grow up to 5 to 6 inches (12.7 to 15.2 cm). The Florida Box Turtle is one of the well known cousin of eastern box turtle and can be sometimes found as far as northern Georgia. The Florida Box Turtle live to about 50 to 60 years of age or sometimes longer. It can be recognized, by it's orange and black background and it has thick yellow stripes on each side of its head and the back of its shell flares out slightly. The Florida Box Turtle highly elongated domed shell with a hinge on it so it can completely enclose its body within its own shell.
Though the Florida Box Turtle makes its home in the wild in marshes, swamps, damp wetlands, open woodlands, or forests in areas of high humidity. Though it loves to lie in the water it rarely enters water deep enough for swimming. The numbers have decreased considerably due to the encroachment of the human race in their habitat. The Florida Box turtle is protected form being killed. It's against the law to own more than two of this turtle species in the state of Florida without the proper permit. In captive, breeding has made their population come back from low numbers.
Other box turtles will hibernate, the Florida box turtle usually slow down with their activities in cooler months, but because they are in a warm climate they do not hibernate. Orange or a bright red, is what the male Florida box turtle eyes usually are. The females tails are smaller then the males, The male's tail is usually longer and thicker. Males also have a hooked claw on its back feet and the Florida box turtle has very sharp claws and its a very good climber. They have four toes on their back feet normally.
Brown or red eyes is common for the female turtle. The female's plastron (shell) is usually flatter than the males.
The Florida box turtle diet consists of a large variety of slugs, insects, snails, tadpoles, vegetables, earthworms, beetles, spiders ,crickets, strawberries, blueberry's, and flies.
Picture University of Georgia's Savannah River Ecology Laboratory

Search the Web for More information on Florida Box Turtle at LookSeek.com Search