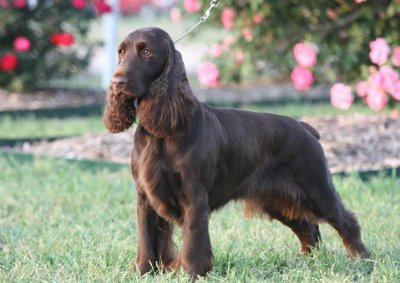 A standard Field Spaniel Dog on average weighs between 35 to 50 pounds (15.8 to 22.6 kg) and its height is 17 to 18 inches (43.1 to 45,7 cm) tall at the shoulders. Field Spaniel is lighter as compared to the other spaniels.
In addition, it does not have an undercoat. The coats of this type of dog come in solid colors such as liver, golden liver, black and roan black and some varieties have some markings on the chest and the throat. The Field Spaniel Dogs coat is silky and moderately long. In addition, Field Spaniel Dogs coat is lighter than that of Cocker Spaniel Dog but requires regular grooming so that mats do not appear in the fur. Field Spaniel Dogs sweat glands are between their paw pads.
It is a Fact a Field Spaniel Dog sees in color and have better low light vision. Field Spaniel Dogs have three eyelids, a lower lid, an upper eyelid lid and a third lid, that is called a haw or nictitating membrane, this keeps the dogs eye protected and moist. Field Spaniel Dogs eyes have a special membrane for seeing better at night, called a tapetum lucidum - a dogs reflective layer in the choroid chiefly of nocturnal, causing the eyes to glow when light at night hits the eyes and they consist of some layers of smooth flat cells covered by a section of double deformed crystals.

The Field Spaniel Dog socialize very well with other types of dogs and in terms of intelligence, they are rated above average. Field Spaniel dogs are independent, sensitive, cautious, adaptable and docile.

A Field Spaniel Dog’s mouth can apply approximately 150 to 200 pounds of pressure per square inch and an American Pit Bull Terrier, German Shepherd Dog and a rottweiler can have 320 LBS of pressure on avg.

Living Conditions
Field Spaniel Dogs are very active and as such not suitable for apartment life. A home with a large yard will be the best option for the Field Spaniel Dog breed. Ensure that you have a good and strong fence in your compound to prevent them from taking off to follow things that might interest them. When locked in kennel, these dogs are very neurotic.
The Field Spaniel Dogs have a life span of between 10 and 12 years.
When purchasing a Field Spaniel Dog from a breeder, make sure to find a good breeder with references, check at least two to three of the puppies that were purchased from this breeder.

Only humans and dogs have prostates and a dog doesn't have an appendix.
Field Spaniel Dog’s nose prints can be used to identify them, their nose prints are like a humans finger print. It is a Fact a dog smells more than 1,000 times stronger than that of a human. A dog’s nose, secretes a thin layer of mucous that helps it absorb scent, after that they lick their noses and sample the scent through their mouth.

Search the Web for More information on Field Spaniel Dog at LookSeek.com Search