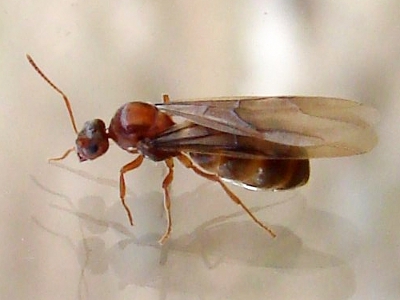 Unlike many ant species, False Honey Ants forage during the winter months when the temperature is just around zero, hence the name "the winter ants". Very few ants in the world are active in these cold temperatures. In fact, they are normally the only visible ants active in zero or subzero temperatures. Though still unknown, the False Honey Ants do not extend into the far northern parts of Canada, despite their resistance to cold weather.

Like other species of ants, false honey ants have males, queens, and the workers. Workers mainly consume honey dew, secretions from flowers, sap, earthworms, arthropods, and decaying fruit. The worker measures up to about 2.5 to 3.5 millimeters. The regular male is between 3.0 and 4.0 millimeters. The false honey queen ant is one of the largest ant queens, measuring about 8 millimeters in length. An interesting fact is that worker ants of the False Honey Ants species are fed to the point that they swell with fat. Then a glandular secretion is produced which acts as the main source of food for the single year.

The prenolepis imparis is usually triangular in shape. They have 5 to 6 teeth, and on rare occasions 7 teeth. The False Honey Ants have a gleaming, shinny head with a dark brown abdomen. The antennae are brown at the base, but yellow at the tips. The color gives the idea that the False Honey Ants are darker in the middle and lighter on each end. Viewing the ant also reveal an hourglass shape, which is one of their distinguishing features.

The false honey ants usually mate from the month of March to April, with most of the mating taking place on the ground. The False Honey Ants mating time is still known as nuptial flight despite the fact that most of it takes place on the ground; this is because the false honey ants still fly during this period. After the mating, the females start a new nest, and the broods appear in autumn. The broods only become adults over winter.
False Honey Ants can lift and carry three times their weight.
False Honey Antsare omnivores like humans, an omnivores, (definition-they eat both other animals and plants).

There are more than 20,000, Ant species around the world, there have been 12,500 that have been classified in specific species.
Ants are the longest living insect of all times they live up to 30 years.

Search the Web for More information on False Honey Ants at LookSeek.com Search