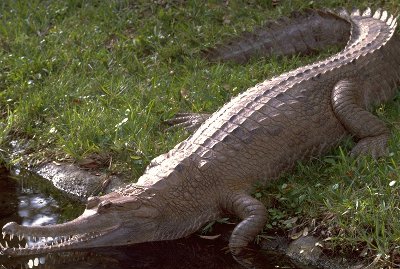 The False Gharial inhabits rivers, swamps and lakes. In the early 1990s, the False Gharial crocodilian breed was observed in ten different river drainages of thirty nine localities in Borneo. The species also occurs in fresh water a ecosystem which is found along the Barisan Mountains, east of Sumatra. However, the present distribution of the species has reduced by approximately thirty to forty percent. This has been caused by fires, agricultural activities, hunting and logging.

The false gharial is a larger in size growing to lengths slightly smaller than that of the gharial crocodilian. The male species can develop to maximum lengths of about twelve to thirteen feet (3.6 to 3.9 meters) with weights of approximately one hundred and ninety (418 lbs)to two hundred and ten kilograms (462 lbs). The female False Gharial crocodilian is usually smaller than the male species growing to lengths of about eleven feet (3.35 meters) and measures ninety three kilograms in weight (205 lbs). Occasionally, the male species can develop up to sixteen feet in length (1.8 meters).

The False Gharial crocodilian has a dark reddish-brown upper surface color with black spots or dark brown and cross-bands on the tail and back. The False Gharial crocodilian snout is slimmer compared to the slender-snouted crocodile and the gharial crocodilian species. The unornamented smooth snout is extensively long and parallel sided, slender with great lengths of about three to four times the width at the base. Its ventral has a grayish-white coloration with lateral dark mottling. The young ones have a mottled black coloration on the sides of body, tail and jaws.

Search the Web for More information on False Gharial Crocodilian at LookSeek.com Search