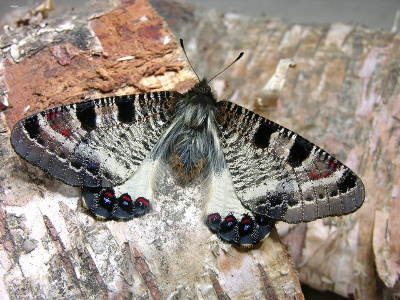 Facts about False Apollos, "Scientific name for is Archon Apollinus", False Apollo is a variety of butterfly that comes from the Papilionidae family. This variety of butterfly is called by its genus name, the Archon. The False Apollo Butterfly are largely found in the Eastern and Central parts of Europe and in the western parts of Asia. The False Apollo are also found in Turkey, Greece, Iraq, Jordan, Syria, Lebanon and Israel. Similar to other butterfly family, the family of Archon Apollinus shows substantial variation with four or five sub varieties. Older False Apollo of this species habitually lose their scales, particularly on the front wings, and appear extremely transparent.

The False Apollo Butterfly "Archon Apollinus" is a small butterfly in its family, with a body length of 54 mm to 60 mm and with a wingspan ranges from 4.5 cm (1 45/64 inches) to 5.5 cm (2 7/64 inches). The butterfly is prominent for the extremely wide-ranging scale free regions on its forewings, and marmorate in white and black colors. These increases through age and the old butterflies have nearly see-through forewings. On the leading edge of their wing, there are two large black spots. There is a sequence of small black spots at the border. Between the chain of the big black spots and small black spots there are a few small red spots.

The adult False Apollo Butterfly "Archon Apollinus" use to spend the majority of their time in warming up in the warm sunlight by settling on grime, low plants or rarely on the rocks. Air temperature is not at all a problem for the False Apollo Butterfly, as far as there is direct sunlight.

False Apollo Butterfly are insects. A False Apollo Butterfly is a herbivore; Meaning that as a caterpillar its first food is its own eggshell and than it will eat the leaves of the plant on which it is hatched. When it becomes a butterfly, it will feed mostly on nectar from flowers, rotting fruit and water with a "proboscis" - a long narrow tube in their mouth that looks like a straw.

When caterpillars become fully grown they will attach to an appropriate leaf or small branch, than they will shed the outside layer of their skin and a hard skin underneath known as a "chrysalis" will be their new look
An adult False Apollo Butterfly will come out from the "chrysalis" than it waits a few hours for its wings to dry and fill with blood, before it takes its first flight.

Search the Web for More information on False Apollo Butterfly at LookSeek.com Search