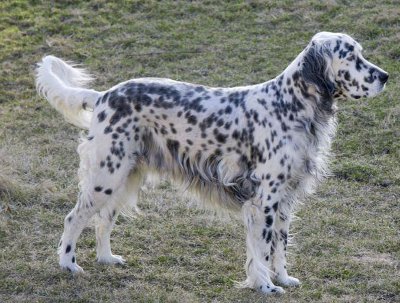 Coat
The coat of the English Setter breed is silky, long and wavy. The English Setter Dog is a distinct breed to the Gordon and Irish Setters, they have a different look and a different personality. The beautiful looking feathered coat is white and combined with darker hairs which has markings that are called (belton). The coat colors are white with orange, blue, brown or lemon of various markings. It is worth noting that some English Setter dogs are tricolor (white, black and brown). The coat usually has some feathering on the back of the legs, tail, ears, under the belly and chest. Its body coat and feathering are flat and straight. Its coat keeps it comfortable in both cold and hot weather.

English Setter Dogs sweat glands are between their paw pads.
It is a Fact a English Setter Dog sees in color and have better low light vision. English Setter English Setter Dogs have three eyelids, a lower lid, an upper eyelid lid and a third lid, that is called a haw or nictitating membrane, this keeps the dogs eye protected and moist. English Setter Dogs eyes have a special membrane for seeing better at night, called a tapetum lucidum - a dogs reflective layer in the choroid chiefly of nocturnal, causing the eyes to glow when light at night hits the eyes and they consist of some layers of smooth flat cells covered by a section of double deformed crystals.

Temperament
The English Setter Dog is very gentle, easy going and calm. It is also friendly, loving, affectionate and amazing with children. It is relatively inactive indoors but vivacious and exuberant outdoors. The English Setter Dog does better on a farm or in the country on a lot of land or a big fenced in yard in the suburbs. This gun dog can be at times mischievous and requires that you start training them at an early age to avoid development of bad habits. As an owner, you need to be firm, authoritative and calm because they do not respond well to harsh treatment.
The English Setter Dog also like to dig and roam around. They are sociable and enjoy playing with other types of dogs. The English Setter Dog are also good jumpers.
They have a lifespan of about 10 to 12 years.

A English Setter Dog’s mouth can apply approximately 150 to 200 pounds of pressure per square inch and an American Pit Bull Terrier, German Shepherd Dog and a rottweiler can have 320 LBS of pressure on avg.

Search the Web for More information on English Setter Dog at LookSeek.com Search