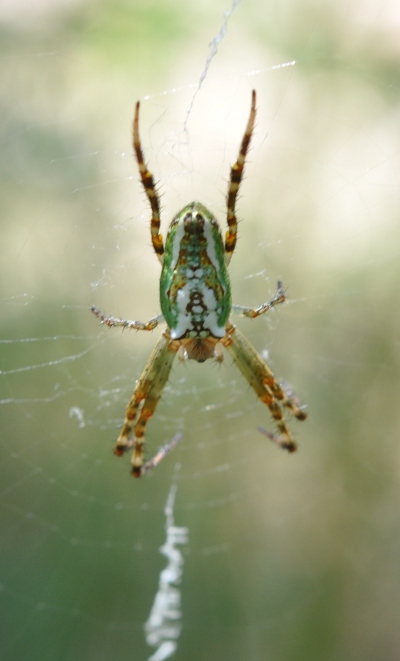 The Enamelled Spider has an enamelled appearance that varies from region to region although different forms may appear in a region, for instance, three color variations occurs in the Hobart area. Some enamelled spiders are pure green in color while others have both green and yellow colors.

The male Enamelled Spider are usually (8-9 mm) long while the females are (14-18 mm) long. The eggs are (1 mm) in diameter. The egg sac is round, flat bottomed and is covered with a red-brown silk that appears wooly. The eggs are always covered by a protective sticky mass.

The Enamelled Spider is active on its net only at night where it hunts by waiting for flying insects to get caught in their sloping orb web. It is a general predator that will feed on any flying insect that may fall in its web. This web is usually placed a meter above the ground. The Enamelled Spider completely eats the web in the morning and retreats to the surrounding vegetation during the day.

There is no known toxicity associated with these spiders they are considered harmless to human beings.

The spider belongs to the Animalia kingdom, a kingdom consisting of all animals. It is further classified in the phylum Anthropoda, because it possesses an exoskeleton, jointed appendages and has a segmented body. It belongs to class Arachnida due to the fact that it is eight legged. It is in order Aranae, the order of all spiders. It is in suborder Araneomorphae, family Araneidae, genius Araneus and species bradleyi.

Its binomial name is therefore Araneus bradleyi (Keyserling, 1888). Some scientists also refers to the enamelled spider as Epeira bradleyi.

Enamelled Spiders have oversize brains.
In the Enamelled Spider the oxygen is bound to "hemocyanin" a copper-based protein that turns their blood blue, a molecule that contains copper rather than iron. Iron-based hemoglobin in red blood cells turns the blood red

A Enamelled Spiders stomach can only take liquids, so a Enamelled Spider needs to liquefy their food before they eat. They bite on their prey and empty its stomach liquids into the pray which turns it into a soup for them to drink.

Search the Web for More information on Enamelled Spider at LookSeek.com Search