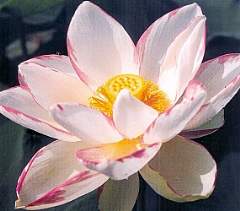 The Empress Hardy Water Lotus is a fairly strong bloomer that grows to a height of approximately three to four feet tall under favorable conditions. These beautiful whitish bloom lotus plants are also called Alba Striata. On the edges of their double to semi double white petals are gentle strokes of deep pinkish colors.

A separate, long, tubular stalk supports each large round leaf and each flower. When in full bloom the Empress Hardy Water Lotus flower usually bursts into a wide white rose which acquires a shaped blossom. Not all the flowers have the same pattern. Each flower has its own different pattern that differs from the rest.

This plant is considered a medium to large spread lotus having their flowers approximately ten to twelve inches and their leaves growing between eighteen to twenty inches across.

The Empress Hardy Water Lotus plants are good for any pond size with their growth spans varying with the seasons. During winter, their brown leaves wither making way for the quick growth in spring. The plant’s short lived flowers are experienced during summer. During this period of flowering, the buds do not open simultaneously and this may cause the overall peak season of bloom for the flower buds to last for approximately fourteen days. Each flower may remain effective for about seven days, after which the signature seed pods appear.

It is important to note that, all pond plants lives increase oxygen amounts in the air and so does the Empress. With the Empress Hardy Water Lotus, it may also be one of the best ways of enhancing your pond as it is the most spectacular pond plant in the aquatic environments.

The Empress Hardy Water Lotus pond plants may become the most popular species in any water garden as they are still quite rare. Like all lotus, the Empress Hardy Lotus are cold hardy and fragrant. Once they have been established they may be almost impossible to destroy.

Like the entire lotus, the Empress Hardy Water Lotus is started inside in late winter in order to bloom the same year. The Chinese people say that, once you see a growing lotus, you never forget it!