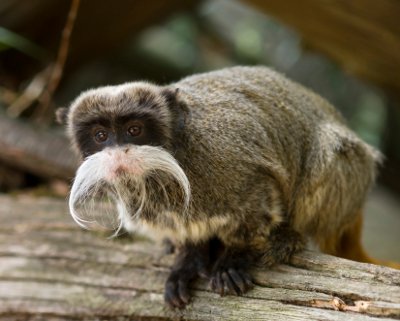 As mentioned earlier, the Emperor Tamarin Monkey inhabits forests. It is primarily found in the Amazonian and lower montane rain forests. However, the monkey can still be found in secondary, primary, and remnant forests where it navigates the lush environment through leaping through trees and seldom touching the ground.

Usually, the Emperor Tamarin Monkey reaches maturity at the age of sixteen to twenty months. These seasonal breeders have a gestation period of six months. Breeding, therefore, occurs during wet seasons where there is plenty of food in the environment. The mating system of the of Emperor tamarin monkey, although initially thought to be monogamous, is in fact polyandrous. In this case, one dominant female mates with multiple males. The reason for this arrangement is due to paternal investing. This is because if the female Emperor tamarin monkey gives birth to a litter, the males have a higher likelihood of taking care of the infants as each of the males knows that one of the infants may belong to him. In the wild, infant mortality is, usually, very high. The first 4 to 14 weeks mark the age when the infants start exploring on themselves. Falling from the trees, therefore, presents the highest risks of death.

In captivity, the Emperor Tamarin Monkey is very interactive and social to people. In the wild, the Emperor tamarin monkey are very playful and behave very actively, gracefully, and rapidly. The oldest, usually, have an upper hand when it comes to power.

Search the Web for More information on Emperor Tamarin Monkey at LookSeek.com Search