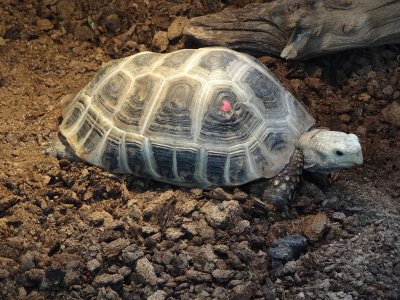 The Elongated tortoise are endangered species that are declining day by day. The major threats for the Elongated tortoises are mass harvesting in their natural habitats. Some parts of China hunt them because they believe their shell when grinned and taken increases sexual desire. Illegal trade has also been a great problem as they are sold as pets.

Elongated tortoises have a pale yellow head which changes to pink hues around the eyes and nostrils during breeding season. This happens to both males and females. Their shell is long, narrow and it is referred to as carapace. The male Elongated tortoise are narrower than females, have a larger tail and a concave plastron.

The female Elongated Tortoise hind claws are longer and more curved that those of the males. This is to enhance nesting building. Their plastron is flat too.

Breeding occurs during rainy seasons and at this time the Elongated tortoise are very active. The males engage in very aggressive behavior when courting where they grab the females and bite them around the head and neck. The elongated tortoises generally weigh around 3.5 kg (8 lbs) and are 30 cm (12 inches) long.

Before the female Elongated tortoise lay eggs, they dig up a flask-shaped nest which is around 15 to 20 cm (6 to 8 inches) deep using their back legs. Afterwards, they lay two to four eggs into the nest and then replace the soil. The eggs are normally large and take around 190 days to hatch. When elongated tortoises are in captivity they can lay up to three clutches in a season.

The Elongated tortoise don’t like strong sunlight and most of the time when the weather is too hot, they tend to stay idle. Mostly the Elongated Tortoise don’t like basking too but if kept in captivity one can choose to set aside a basking area. But in some parts of India they have been found basking.

When in captive, elongated tortoises require a wide range of foods. Most people feed them with vegetables only but this is not enough. The Elongated Tortoise can be fed with meat, snails, eggs, green leafy materials and fruits. This is a good meal which supplements the normal vegetable diet and ensures their normal growth. When in the wild, there are a lot of fruits that they feed on.

The Elongated tortoises hardly survive in cold climates. It has been observed that when they are exported to colder places especially the European countries as pets they suffer a lot and even die. The Elongated tortoise love to drink water and bath, so when you keep them ensure that their cage has plenty of water.

Search the Web for More information on Elongated Tortoise at LookSeek.com Search