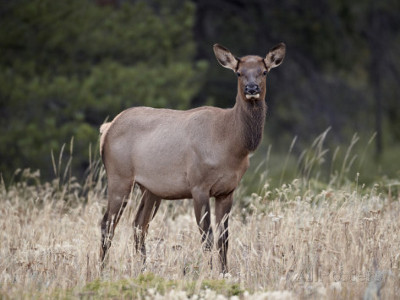 Facts about Elk, "Scientific name for Elk is Cervus canadensis". The Elk is also known as wapiti. Around the world an elk is considered to be the largest species in the deer family. In North America and Eastern Asia, it is the largest mammal in there is.

Initially, Elk was believed to be a subspecies of the red beer, but several studies and research were done proving that they are two different species.

Elk is a ruminant animal meaning it has four chambered stomach. The number of toes is even on each foot just like those of camels and goats. Elk eats grass, plants, bark and leaves. The Elk species has been able to adapt on many locations away from their native places. You will realize that in North America a male Elk is called a bull and a female is called a cow whereas in Asia it is stag and hind.

The male elks are very domineering when it comes to sexual matters. The Elk grow antlers which are shed every year and their main function is to attract females. These antlers grow up to 3 1/2 feet (1.2m) long weighing around 18kgs. The Elk are normally made of bones and protected by a soft layer of skin known as velvet. The powerful Elk strips the velvet off their new antlers while in violent clashes that determine who gets to mate with the females. The male Elk with the bigger antlers, usually win these battles and dominate small herds.

During the mating season, In early summer, elk migrate to high mountain grazing grounds where the cows (females) will give birth. The male elk holds a female in its harem and can do anything to protect it from other bulls. It participates in ritualized mating behaviors whereby they wrestle one another as a way of attracting females. Again, the male elk digs up holes where it urinates and smears itself with that mud as an alternative way of attracting females. A Bull elk will lose their antlers each March and they begin to grow them back in May to be prepared for the late summer breeding season.

Mating in female involves many attempts considering that the Elk have a short estrus cycle. The reproduction is normally very common when the female Elk is around 450 lbs (200kgs). The gestation period takes 240 to 262 days.

Before birth the female Elk stays away from other herds in order to protect the unborn calf from predators. Thereafter, the offspring are born weighing between 33 to 35 lbs (15 and 16kgs). Elk stays in isolation until the calf is old enough to defend itself. In normal circumstances only one calf is born but there is a possibility of two being born though it is not very common.

The elk is predated by various animals, wolf and coyote are the common ones. also even black and brown bears also prey it. The ones that are always in danger are the calves and the weak animals. Elk is also susceptible to various infectious diseases but by use of vaccination those diseases are eliminated.

Migration occurs just like any other deer family. During winter seasons, the elk migrate to woodland areas where there is enough protection from the harsh weather. As a way of escaping the snow, they tend to migrate to higher attitudes. Human hunting has also contributed highly on their migration.

Search the Web for More information on Elk at LookSeek.com Search