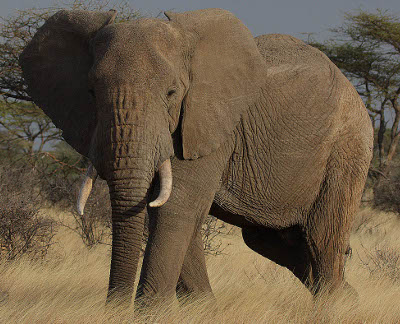 Facts about Elephants, Elephants come in only two species that are alive today. They are known in the Kingdom as (Animalia), Phylum is (Chordata), Class is (Mammalia), Order is (Proboscidea), Family is Elephantidae. "Scientific name for the African Elephant is Loxodonta africana"and "Scientific name for Asian Elephant is Elephas maximus". They are the African Elephant (Loxodonta africana) that has less hair then the Asian Elephant (Elephas maximus). Genetic studies have proven there are at least two subspecies of African elephants, they are the savanna (Loxodonta africana africana)and the (Loxodonta africana cyclotis) elephants. The most noticeable difference between them is that the African Elephant has much larger ears. This is because it lives mainly in the open savanna of Africa, where its large ears flap to help it keep cool, that's why you always see them flapping their ears on TV shows about Elephants. Indian elephants live in forest and spend most of their time in the shade so they have not the need for large ears.

The most familiar features of an elephant are its trunk and tusks. The trunk is a combination of the animals nose and upper lip. It is efficient in scent detecting, and is used to grasp vegetation, which is then passed to the mouth and to sucks up water, which is squirted into the mouth or over the animals back. The tusks are two long teeth and are used to dig up water during a drought and they are also used as weapons.

Elephants eat an enormous amounts of food, a normal diet includes about 50 gallons (189 liters) of water and over 500 pounds (226.7kg) of vegetation.

The courtship between a bull and a cow Elephant is affectionate and may go days or even weeks. After mating this relationship continues for about 10 months. When the cow becomes pregnant the bulls place is taken over by a female companion. The birth takes place about one year and the male and female companion continue to protect the calf for several years.

Elephants are very well known for their intelligence. Members of the herd cooperate not only in protecting the young from predators; they are also known to come to the aid of wounded elephants.

The Elephant is endangered by poachers illegally hunting them for their tusks (Ivory) and meat, also humans encroaching on there territory. A lot of Elephants are protected in sanctuary's, but it is still hard to always patrol to keep out the poachers. The Elephant may became extinct in the wild if the trend continues. The Elephant is the largest land mammal there is on the planet.
Both male and female of the African Elephants have tusks and only the male Asian elephant has tusks. The tusks are used for digging to find food and water. The adult Elephant needs to drink approximate 65.7 gallons (215 liters) of water a day.
"Fear of Elephants is Pachydermophobia".

Search the Web for More information on Elephants at LookSeek.com Search