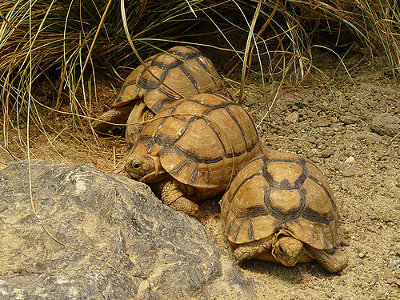 Egyptian tortoises are the smallest in the northern hemisphere. The males are smaller than the females and also have a longer tail. The Egyptian tortoise shells colors ranges from ivory to pale gold to dark brown to pink or yellow.

The coloring of the Egyptian tortoise helps them since it regulates the impact of sunlight. The paler the color the more the tortoises staying in the deserts adapts to stronger sun. While in the desert, the paler tortoise is safe from predators because the colors help them camouflage. In fact it is very hard to recognize them since they normally look stones.

The head and limbs have a pale ivory yellow to yellowish brown. At the bottom of the shell, the Egyptian tortoise are light yellow and each abdominal scute has two dark triangles. The scutes fade as the tortoise age.

In most cases, Egyptian tortoises are found in deserts. They are limited to coastal desert in the south east Mediterranean basin. They don’t move more than 65 miles (90km) from the coast. They are more adapted to very dry weather and some areas even experiencing very little rain per year. In fact some deserts where they are found 1 7/8 inches (50 mm) of rainfall has been reported.

The eggs are laid in bowls beneath bushes or burrows and they can lay up to five eggs. The Egyptian tortoise make clutches and each clutch contains one to five eggs which hatch in the summer. The young mature in five years, growing to a length of 4 to 6 inches (10 to 15 cm). The young tortoises are believed to be inactive most of the time, feeding less and most of the times hiding from the strong sun. They only come out to feed when the cools down.

They are herbivores and they feed on grasses, deserts plants and fruits that survive the harsh environment. The Mediterranean Sea is believed to be of essential when it comes for feeds for the tortoises. The moisture that comes as a result of cool summer temperature and winter temperature, there is a rise of plenty rich plants that gives enough feeds for the tortoises.

Since the Egyptian tortoise are endangered species, there are plans to conserve them. They tend to be diminishing in a very high rate and this is witnessed by the fact that they are almost extinct in Egypt.

Search the Web for More information on Egyptian Tortoises at LookSeek.com Search