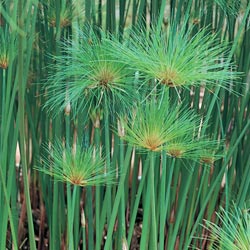 Cyperus Papyrus plant grows on the Nile River where there is fresh water and it is from this plant that the Egyptian papyrus is made. The Cyperus papyrus plant grows in water up to one meter deep and the plant can be up to 4-5 meters in height. This plant has a thick triangular shaped stem with a breadth of 15cm; a thing that makes it possible for the plant to survive the strong winds in the water that could otherwise break it.

More than 5000 years ago ancient Egyptians started making paper for export purposes from the papyrus plant.

Ancient Egyptians are known to have used the papyrus plant in a number of ways such as: making sandals, boats, mats, baskets, fencing and also producing medicine and food from the reeds of this plant. The discovery of the importance attached to this plant led to its jealous guarding by Egyptian rulers who made its production a state monopoly.

The production of the Egyptian papyrus lasted for several decades without competition until the discovery of paper by the Chinese. Its production and popularity tremendously declined and by the third century AD very little if any Egyptian papyrus was produced especially for commercial purposes.

It took Dr Hassan Ragab a lot of research and trouble to reintroduce the once popular papyrus to the Egyptians in 1965. There were hardly any recordings on how the papyrus was manufactured by the ancient Egyptians. However, Dr Ragab figured out how to make the Egyptian papyrus and today you can find it in Egypt whenever you go visiting.