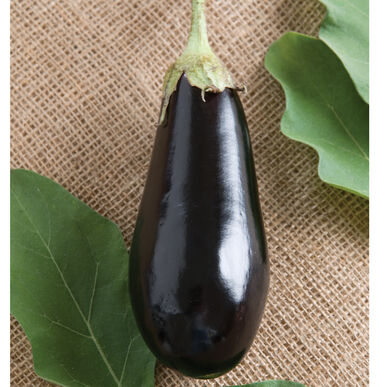 Facts about Eggplant. "Scientific name for Eggplant is Solanum melongena". The Eggplant or Guinea squash is a strange purplish looking edible fruit. Let’s review some basic and important information about this strange, delicious alien looking fruit, known has the Eggplant.

The Eggplant is native to Southeast Asia and is a staple in cuisines of the Mediterranean region. In fact, Eggplant is a centerpiece for many dishes around the world, dishes, such as the Greek moussaka, Italian eggplant parmigiana, and Middle Eastern relish baba ghanoush.

Grown annually, Eggplant features an erect bushy stem, with a tree-like appearance that frequently contains spines. The Eggplant is known to grow up to 3 feet (.91 meters) high. Leaves of the eggplant are large and slightly lobed. A violet flower grows sporadically on the planet itself. The Eggplant, which closely related to the tomato, is often large, but sometimes be small has a grape, contains a glossy surface, and is regularly seen in various colors; dark purple, red, pink, yellow, white, and sometimes striped.

Growing Eggplant is no easy task. Eggplants do not handle cold temperatures very well, especially in the beginning stages of growth. A best practice for starting to grow an Eggplant is to start the planet in a planting pot and place the pot in a location that receives direct sunlight, shielded away from the cold. The plant should remain inside the pot for about 8 to 10 weeks. Following this best practice allows for a better opportunity for the Eggplant to thrive once transplanted in a garden, and allows the Eggplant to forego any dangers associated with frost during early spring night temperatures. Has previously mentioned, Eggplants are extremely sensitive to cold temperatures, and once exposed will seldom recover from cold damage.

Once the Eggplant matures enough to transplant into a garden, the plant needs adequate spacing to promote healthy growth. The proper spacing should consist of 2 feet (.60 meters) apart, within a row, and row spacing should be 3 feet (.91 meters) in length.

While in the garden, Eggplants need protection from garden invaders. The enemies of the Eggplant consist of Flea beetles, tomato horn worms, Colorado potato beetles, and cutworms.

The Eggplant typically reaches its harvesting point during the mid to late summer month. Eggplants are ready for harvest after color appears, and still has a glossy shine.
Even though temperamental, Eggplants can be grown and harvested during the summer months to be enjoyed on various types of dishes on their own or has a side.

Search the Web for More information on Eggplant at LookSeek.com Search