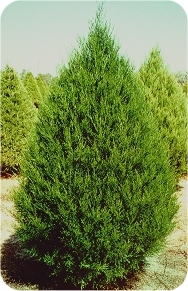 The Eastern Redcedar or Juniperus virginiana is also called the red cedar, red juniper, savin, eastern juniper and aromatic cedar. It is commonly seen in the Eastern United States. It has been moved beyond its native range into the Great Plains by human transplantation. It does not grow around the Mississippi river’s heavy clay soils. While the species isn’t considered commercial, the tree produces fragrant oil and beautiful wood.
This species can grow up to forty feet tall, though it is very narrow. However, it is just as often found as a compact bush. The leaves are scaly, green and short.

The eastern red cedar tree is considered a pioneer, meaning it is one of the first trees to grow in a field. They often grow as under-story trees in the forest, beneath the larger trees with broad canopies. It grows in a wide variety of climate zones ranging from fifteen to sixty inches of rain per year.

The Eastern Redcedar has reddish-brown bark that peels off in shreds. Cedar bark like this has been used by Native Americans to make rope, mats and basketry.

There are two types of flowers on the Juniperus virginiana. The male flowers are yellow and brown. Female flowers are light blue or bluish-green. Once fertilized, the flowers turn into berry like cones a quarter of an inch wide that go from green to blue.

The Eastern redcedar is susceptible to bagworm moths that eat the leaves. This is most likely to kill a young tree. They are also susceptible to fungi like polypore.

Juniperus virginiana is a critical part of its ecosystem. It alters the soil in ways that encourage earthworm activity and protects fragile soils.