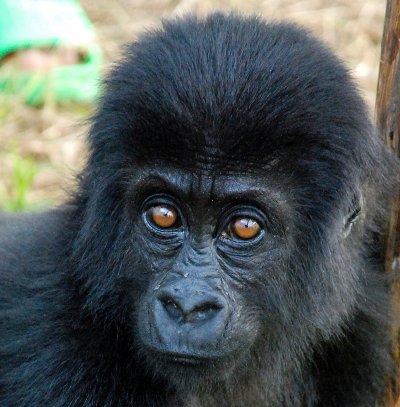 Eastern Lowland Gorillas have a more diverse diet than the western lowland gorilla, and the diet changes with the seasons. The eastern lowland gorilla relies more heavily on fruit in their diet, up to 25% of their overall calories. The Eastern Lowland Gorilla eat leaves and pith for starches. They will eat bamboo if it is available. While overwhelmingly vegetarian, they will sometimes eat ants. Eastern Lowland Gorillas have larger home territories than western gorillas because of their heavier reliance on fruit. They will travel further in a given day, as well, as they exhaust the readily available fruit. They’ll cover up to a mile a day and live in a range of up to two and a half square miles.
Eastern lowland gorillas are endangered. There are less than 5,000 of them in the wild by some estimates, though other sources estimate their numbers to be 15,000. However, even the high number is a tenth of the number of western lowland gorillas. They are doing better than the Cross River and mountain gorillas, who each number in the hundreds.

The Eastern Lowland gorilla is sometimes hunted by the leopard. However, the greatest threat to gorillas is humans. They suffer due to decreased habitat as farming encroaches on the forest and trees are cut down for fuel. The Eastern Lowland Gorilla are sometimes killed for their skins, hands and other items for creation of novelty items and the capturing of baby Eastern Lowland Gorillas as pets or for zoos, though this is less frequent due to various treaties to inhibit wildlife trade. However, the hunting of gorillas for “bush meat”, meat from the forest deemed more powerful, healthy and attractive than standard meat like goat meat or beef still occurs. Bush meat is actually a greater problem, since the evidence is readily consumed by customers, destroying the evidence, whereas a stuffed gorilla hand remains an indictment of the animal’s murder for years.

Search the Web for More information on Eastern Lowland Gorilla at LookSeek.com Search