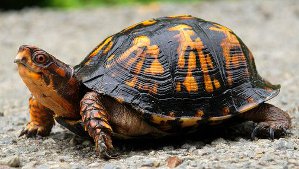 Eastern Box Turtles are easily identified by their bright markings. Box turtles have a high, dome-shaped carapace ( top part of the shell ) and a hinged plaston ( bottom part ). They are usually dark brown or olive colored with bright orange or yellow patterns. The male Eastern box turtles are slightly larger on average then the females, the posterior lobe of their plastron is concaved, and the claws on their hind legs are short, thick, and curved. Males also have thicker and longer tails. Female Eastern Box Turtle rear claw are longer, straighter and mores slender, and the posterior lobe of their plastron is flat or slightly convex. The male will usually have red eyes, the female will have yellowish brown eyes. The Eastern Box Turtle can grow up to eight inches (20.3 cm) in length. Eastern Box Turtles have a down turned beak. It is the only "land turtle" found in North Carolina, box turtles are slow crawlers, they live a long time and slow to mature in age.
The Eastern Box Turtle have a highly domed carapace. A key characteristic of Eastern Box Turtles is their hinged plastron (bottom of the shell) that can be shut completely to deter predators. Other turtles such as mud, musk and blandings turtles also have hinged shells, they can't be closed completely.

Eastern Box Turtles resemble tortoises, but they are actually more closely related to many aquatic turtles and belong to the the same family as spotted, bog, chicken, map and painted turtles, as well as sliders, cooters and diamondback terrapins.
The Eastern Box Turtles are omnivorous ( eats plants and animals ). Their diet consists of strawberries, blackberries, mushrooms, vegetables, slugs, snails, earthworms and insects, like grasshoppers and crickets. Also dead animals such as birds and frogs.

Preferred body temperature is between 84 and 100 F. In the heat of the summer, box turtles largely restrict their activity to mornings and after rain. When it gets too hot, they hide under decaying logs and leaves, crawl into mammal burrows, or into the mud. In the spring and fall, may be output foraging during all daylight hours, and the Eastern Box Turtle sometimes bask in the sun to keep warm. When it is really hot they go into puddles and pools to cool off. In the northern regions, Eastern Box Turtles go into hibernation in October or November, but father south they remain active later in the year. The Eastern Box Turtles usually have a range with a diameter between 700 and 800 feet (213 to 244 meters) or less in which they stay. The Eastern box turtle are often found together and show no antagonism towards each other.

Search the Web for More information on Eastern Box Turtle at LookSeek.com Search