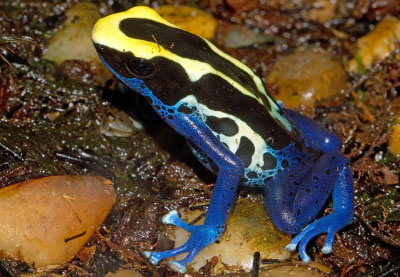 Facts about Dyeing Poison Frogs, "Scientific name for Dyeing Poison Frog is Dendrobates tinctorius". The dyeing poison frog is a breed of poison dart frog, which is one of the largest frog breeds, with the body length of 1 7/8 inches (50 mm). The Dyeing Poison Frog breed is spread all through the eastern part of the Guiana Shield, including portions of Suriname, Guyana, Brazil, and almost all parts of French Guiana.

Search the Web for More information on Dyeing Poison Frog at LookSeek.com Search