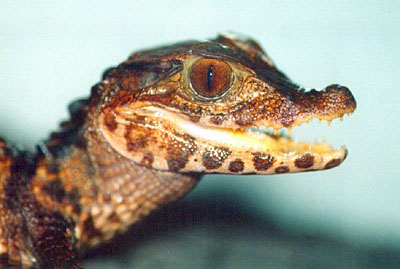 The Dwarf Caiman crocodile was previously described as the smallest New World crocodilian by Georges Cuvier, a French zoologist in the year 1807. The crocodile species and the P. trigonatus species are the two remaining species in the genus Paleosuchus with the other breed species being the closest relatives of the caimans in the subfamily Caimaninae. Estimated population in the wild is about 1,000,000.

The male Dwarf caiman crocodilian can grow to maximum lengths of about 5 feet (1.5 meters) while the female species can develop to about 4 feet (1.2 meters) in length and rarely six feet (1.8 meters). It is important to note that the Dwarf caiman crocodilian is not only the smallest living species of the caiman and the alligator family, it is also the smallest in of all the crocodilian species with weights ranging from approximately 13 to 15 pounds (6 to 7 kg) which is similar to the weight of a twelve month old juvenile of the larger crocodilian species.

Search the Web for More information on Dwarf Caiman Crocodilian at LookSeek.com Search