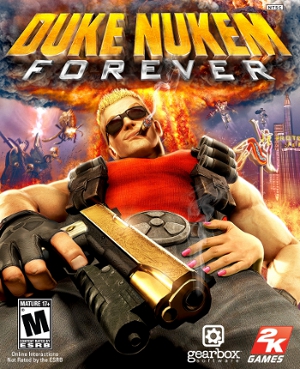 Now Duke Nukem originally came out a PC game in 1991, and had a few versions have been released over the years. Duke iconic shooter of the 90's was for his vulgar language, crude humor, and use of woman like objects, which in the early stages of console video games was refreshing and pretty funny.

This particular version of Duke Nukem has been in development hell since 1997, and was finally released in 2011, for the XBOX 360 and PS3 consoles.

So herein lies the problems.

This game should have been released 6 years ago than it would have been awesome. What you get here is running around, and sometimes battling monsters/aliens in a way that is, well, boring.

There is the tongue and cheek humor like drinking beer, getting oral sex by girls in schoolgirl outfits, or watching yourself take a piss., but the jokes wear really thin quickly, and what you end up with is a clunky game, literally. I think they are pushing to much for the nostalgia of the older games, but guess what it's 2011. They could have used everything about the character, but the mechanics of the game is what needed and overhaul. The loading screens take way to long for this game, and that is something that I'm sure annoys everyone.

Graphics are well done but that doesn't help really, sorry.

You can't upgrade anything, and it is not as action-packed as it should have been. Shit they could have taken advantage of everything from Modern Warfare or a Fallout game, and it would have been an improvement.

So all in all DUKE NUKEM FOREVER returns to his classic style and it feels really old and I was kind of embarrassed by it. Even a kid that tries to sneak in this 17+ game will be sorely disappointed.

In regard to the Blockbuster rentals, I returned it the next morning and got something far more superior, but I will review that later. But if you want to check it out, for your own shits and giggles, but don't say I didn't warn you.