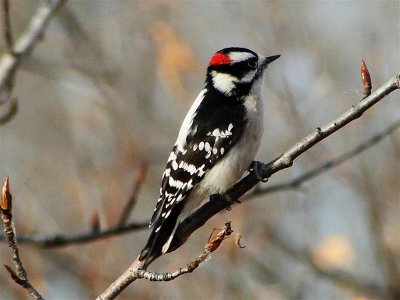 Mostly, Downy Woodpeckers feed on insects, as well as beetle larvae that survive in the wood or in the bark of a tree, including caterpillars and ants. They also feed on pest insects, such as the corn earworm, bark beetles, tent caterpillars and apple borers. The Downy Woodpecker plant foods include plant material, chiefly acorns, berries and grains. They are common nourishing birds, feeding on suet and black color oil sunflower seeds and rarely drinking from hummingbird nourishments.

The average lifespan of the Downy Woodpecker ranges from 11 years to 12 years.

Male and female Downy Woodpeckers are able to drum hollow trees logs execrate. Since woodpeckers do not have vocal cords and don't sing, this pecking activity also plays an important role in communicating with each other. Woodpeckers drumming is also to attract a mate, mark out territory, both sexes are known to drum.

When feeding, drumming and building a nest cavity, a Downy Woodpecker can peck up to 20 times per second, wow that's fast! or a total between 9,000 and 12,000 pecks in a day.

Downy Woodpeckers have a prominent surge in flight comprise of three rapid wing flaps, followed by a quick glide when the Downy Woodpeckers wings are tucked against its body rather than spread out like many other birds.

Downy Woodpeckers are omnivores; meaning - an animal that eats food of both animal and plant and origin.

Downy Woodpeckers are monogamous meaning- the pair will mate for lifetime. Both male and female prepare the nest in the tree for babies and both will help feed them. The female Downy Woodpecker will lay between 3 and 5 eggs and the incubation period will lasts 11 to 14 days. After one month of hatching, young woodpeckers will leave the nest and venture out on there own.

Search the Web for More information on Downy Woodpecker at LookSeek.com Search