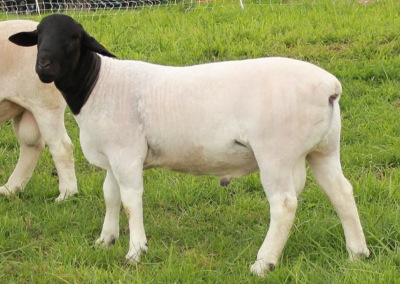 Facts about Dorper Sheep, "Scientific name for Dorper Sheep is Ovis aries". There are two types of live stocks which are easy to rise for a person who is a beginner are sheep as well as goat. Raring of a Dorper Sheep is somewhat similar to goat raring. The goats need to be cared and well managed. The Dorper Sheep need a lot of grass as well as plenty of land for grazing for raising the sheep to become quite healthy. It is good to build a nice shelter for the Dorper Sheep so they do not suffer any external temperature. In 1995 the American Dorper Sheep Breeders Society was organized and began. Mature Dorper Sheep rams average about 230 pounds (104.3 kg) and mature ewes average about 180 to 210 lbs (81.6 to 95.2 kg).

Milk from Sheep is mostly used to make gourmet cheese. A Dorper Sheep has an average body temperature of about 102.5˚F (39.1˚ Cel).
A lambs is usually sold on average for meat between 90 to 120 pounds (41 to 54.4 kg). "Mutton" is the name of the meat from a full grown sheep. There is a split in the Dorper Sheep upper lip which allows them to select their favorite leaves off a plant. A Dorper Sheep has a life expectancy between 6 1/2 to 11 years. Milk from sheep has a higher level of zinc, calcium, protein, fat, riboflavin, thiamine and niacin than milk from cows or a goat.
A Dorper Sheep is a herbivores, that eats leaves, grass, hay and furns. A sheep has four chambers to its digestive system that helps break down what they eat. Sheep are "Ruminant" is any hoofed even-toed, mammal that digests its food in two stages. First by eating the raw materials and regurgitating a semi-digested form known as "cud" (ruminating: chewing the cud.) then eating the cud.

Different breed of sheep
One should make decision that which breeds would be raised by the person. Thus, there is a list of different types of sheep can be used for different purposes and the sheep breeds are listed below-

If a person is interested in sheep lambing then Morrisdale along with the Columbia sheep are very good.

If one likes to raise sheep for their meat then Dorper Sheep as well as the Hampshire sheep breeds is the best option.

And if a person want to produce the wool then there is no other option than the Merino breed.

Over years, since older days to modern days sheep have been working in a form of life for various people. Sheep are quite productive and will reach at a high production in few years. Therefore, one should require some of the equipment for different purposes such as shearing, fencing, tagging, clearing as well as for some other barnyard tools are also required that help in managing your Dorper Sheep. Only thing that is required for rising the Dorper Sheep is, one should take good care and in return the Dorper Sheep will provide their owner with plenty of quality products which will help in producing good wealth.

Sheep husbandry as well as the breeding sheep is an act of raising and breeding the sheep that are domestic for various purposes of harvesting the sheep milk, meat and the wool. In the entire world there are few countries that are having the favorable climate along with the environment for sheep breeding. That is why these countries are at top for producing the sheep in the whole world. Breeding a Dorper Sheep must be done in a dry but in a cool place. The Dorper Sheep must have plenty of room to move and enough grass for grazing.

Raising of a Sheep

Sheep are the precarious animal; therefore raising of a sheep is quite good for a person who is a beginner as there is a need of products produced by the sheep such as dairy, meat as well as wool. It is well known that most of the products are formed by the milk of the sheep. Sheep milk is very good in compared to all type of milk regarding the nutritional value. Raising of a Dorper Sheep will take time as well as large amount of commitment, but it also provides rewards and will be enticing if a person does stick to it for a long time.

Search the Web for More information on Dorper Sheep at LookSeek.com Search