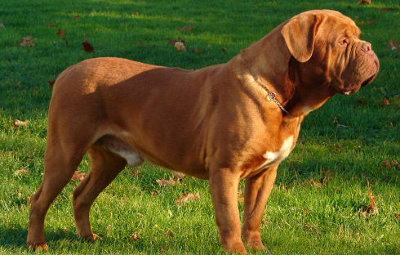 Dogue de Bordeaux dog was introduced in France in the fourteenth century and it became popular in Southern France a region known as Bordeaux. That’s the origin of its name. The French didn’t want to lose their pure breed of the Dogue de Bordeaux Dog so they decided to keep it pure by breeding it with huge heads; which are pioneer breeds from Germany.

Dogue de Bordeaux dog is not tall, but low to the ground. It is muscular, well balanced and very powerful. The body is thick, has a top line which is not straight and rounded croup. The circumference of the head of the Dogue de Bordeaux Dog is 26 to 30 inches (66 to 75cm). The short muzzle is a 1/3 the total length of the head. The front of the Dogue de Bordeaux dog legs are straight and have heavy bones, a good pastern, tight feet that looks like that of a cat and a straight tail (the base is thick and pointing at the end).

A Dogue de Bordeaux Dog’s mouth can apply approximately 150 to 200 pounds of pressure per square inch and an American Pit Bull Terrier, German Shepherd Dog and a rottweiler can have 320 LBS of pressure on avg.

Dogue de Bordeaux Dogs have two times the amount of ear muscles than people. It is a fact a Dogue de Bordeaux Dog can hear a sound at four times the distance of a human. Sound frequency is measured in Hertz (Hz) Def-Hertz is the measurement of frequency, explicitly it's one cycle per second. The higher the Hertz are, the higher the pitched the sound is. Dogs hear best at 45,000 Hz to 65,000 Hz, while humans hear best at around 20 Hz to 20,000 Hz.

According to researchers, Dogue de Bordeaux dog life expectancy is short. It is believed to live for around six to seven years. This is because of its branchycephalic head which affects effective breathing.

They were recognized in 2008 by the AKC the Dogue de Bordeaux dog. The Dogue de Bordeaux dog will be a great dog to guard and protect your house or business, because of its strengths and fearlessness anyone would feel safe. They can also be the family dog, with their loving ways and can be great with children if raised with them. With most dogs, a strong and stern owner is important to let them know who is boss, but especially with the Dogue de Bordeaux Dog. Training is very important for having a good relationship with your dog. Walks are important or a big back yard for exercise, but they love to be inside as the house dog where they fell safe in their territory.