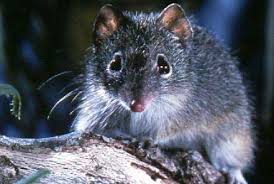 Facts about Dibbler Marsupial. "Scientific name for Dibbler Marsupial is Parantechinus apicalis". Dibbler is a threatened species of marsupial and it inhabits southwest of Western Australia and offshore islands. You can also find the Dibbler on Boullanger Island, Whitlock Island and Escape Island off Jurien Bay.

Dibbler is a member of Dasyuromorphia order and the only member of the genus parantechinus. It has a speckled fur that is whitish around the eyes. It is a small nocturnal carnivore.

This group of genus was first described by John Edward Gray in 1842 and placed it in phascogale genus. But later in 1947 George Hamilton Tate created the genus Parantechinus and placed it there. Surprisingly it was later assigned to antechinus genus before it was split to its own genus. The genera around the family of this dibbler remain unsolved to date.

The vegetation areas which have thick litter and sandy soils are its most preferred habitats. You can find the dibber sleeping in hollow logs and caves during the day.

It was believed that dibbler had become extinct but it was found in 1967 at south coast of Western Australia in a beach. Dibbler still remains a threatened species though in Western Australia they operate a conservation project. This is very helpful because it helps them to breed and release them to the wild.

Dibbler's main predators are feral foxes and federal cats. But the cause of their extinct is because of the loss of habitats. This is mainly caused by land clearing and forest fires.

Search the Web for More information on Dibbler at LookSeek.com Search