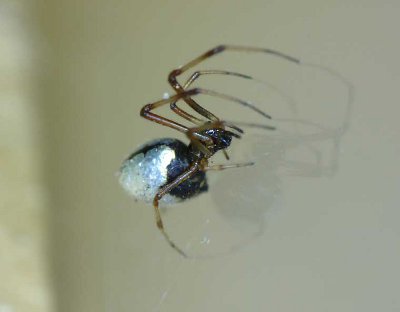 Sometimes the relation between the host and the dew drop spider becomes mutual as the host doesn’t eat the smaller preys. Insects once trapped in a spider web die and they have to be eaten or cleaned up so that the next prey-intruder won’t have any idea about what happened there. The host lets the Dew Drop Spider eat the smaller insects on that account. Most Dew Drop Spiders are relatively small in comparison to other spiders (3-4 mm).

Most of the dew drop spiders are found in tropical regions. The Dew Drop Spider prefer large and clustered webs to small and isolated ones as they will have to hide amongst the true owners of the webs. A clustered web serves as an invisible layer for them. In case the Dew Drop Spider need to flee, it’s easier to disappear if they have chosen a clustered web. Less number of kleptoparasites is seen in isolated webs.

The name of the genus to which dew drop spiders belong comes from two Greek words such as “argyros” and “odes” meaning “silver” and “like” respectively.

The Dew Drop Spider have a sclerotized carapace that is round in front with three anterior teeth and two posterior denticles. They lack a pattern on their abdomen and also they have a different main body structure. Their male chelicerae aren’t enlarged, unlike others. The female Dew Drop Spider makes a globular shaped sac to lay eggs and waits in one place until they are hatched.

Dew Drop Spiders have oversize brains.
In the Dew Drop Spider the oxygen is bound to "hemocyanin" a copper-based protein that turns their blood blue, a molecule that contains copper rather than iron. Iron-based hemoglobin in red blood cells turns the blood red

A Dew Drop Spiders stomach can only take liquids, so a Dew Drop Spider needs to liquefy their food before they eat. They bite on their prey and empty its stomach liquids into the pray which turns it into a soup for them to drink.

The Arachnids are even in a larger group of animals called "arthropods" an invertebrate animal of the large phylum Arthropoda, which also include spiders, crustaceans and insects. They are the largest group in the animal world, about 80% of all animals come from this group. There are over a million different species. There are more than 40,000 different types of spiders in the world

Search the Web for More information on Dew Drop Spider at LookSeek.com Search