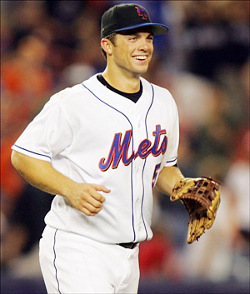 David Allen Wright was born on December 20, 1982 in Norfolk, Virginia. The Wright family lived in the suburb of Chesapeake Wright parents, Elisa and Rhon Wright, would have three more boys Stephen, Matthew and Daniel. David�s father was a police officer who became captain in the Norfolk Police Deparment.
David played other sports, including basketball, baseball was always his primary focus. Like many kids in the Mid-Atlantic states, his sports idol was Cal Ripken. He also liked Michael Jordan. The eldest of four brothers, David became a star athlete at Hickory High School where he was selected as the Gatorade Virginia Player of the Year in 2001. He was chosen in the first round of the 2001 MLB Draft and quickly rose through the Minor League ranks to become the 129th third baseman in New York Mets history." BJ Upton, who played in the same Little League. The two would become close friends, often playing against each other. He also had his heart set on becoming an engineer. The big leagues were not in his plans.
Nonetheless, David loved pro baseball. He reguarly attended games of the Tidewater Tides, the top farm team of the Mets. The stadium was just 10 minutes from his house. As David said, "When I was a kid, I would have loved the chance to come to Shea and see the players I grew up watching in Norfolk
David Wright Major League debut was on July 21, 2004, he has been a big part of the Mets success. The Mets third baseman is a Golden Glove Award winner, Silver Slugger Award winner, six-time National League All-Star and a member of the exclusive 30/30 club. Wright said "I have been blessed with the ability to play this game I love so much". "But, I was taught that with great power comes great responsibility. I feel it is my duty to give 100 percent on the field and to give back to the people of this city who have given me so much."
The Mets, who had a supplemental pick at the end of the first round after losing to free agency Mike Hampton, selected David Wright as 38th overall. Former player Randy Milligan had an easy job scouting the youngster and an even easier one convincing him to become a Met.
It took about a month to get David�s deal done, but he signed for a $960,000 bonus and joined the Kingsport Mets of the Appalachian League in late July. He played 36 games and batted an even .300. David�s manager was former major league infielder Joey Cora. Among his teammates was catcher Justin Huber, a highly prospect teenager from Australia. The Mets had moved David to third base and were prepared to shift him to the outfield if his new position was too much for him.
David was voted in 2006 the NL's starting third baseman in the All-Star Game, and he hit a solo homer in his first at-bat against Kenny Rogers. The blow did not come as a surprise. The previous night, David launched 16 homers in the first round of the Home Run Derby. Ultimately he finished second in the competition to Ryan Howard.
David's final numbers were even better than the year before. He had 71 extra base hits, including 26 homers, and tied Carlos Beltran for the team lead with 116 RBIs. David batted .311 one of four Met regulars to reach that vaunted mark.