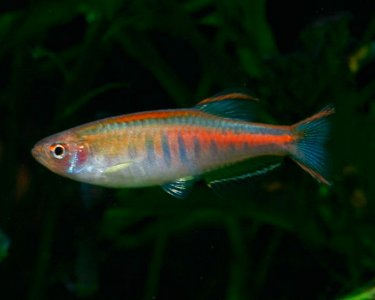 Danio is a common name used to describe fish members of the danio genus. These genuses of fish are very common in aquariums.

Derived from the word dhani from Bengali, danio simply means the rice field. The first species of danio was described in the 19th century and in a century later, it was split. The larger species was the one named danio whereas the smaller species was named Brachydanio. But in late years of the 19th century, they were back combined. So currently there are around 21 species that are recognized to date.

The danio is native to Southeast Asia. They are mostly found in fresh water streams and rivers. The water should have a pH of between 6 and 8 with a carbon hardness of not more than 12 KH. The temperature should be around 20-26 degrees Celsius. Most species have bright colors and you will find them in aquariums throughout the world.

Most of them have horizontal stripes expect just three species that have vertical stripes. They have two pairs of barbels. They are round 4-15cm in length, live for only three years and are the only annual fish in the wild.

Generally, taking care of them is not very hard only a few tips especially when preparing them for breeding. Special foods which have high quality contents are necessary and plenty of fresh foods too.

They are not very aggressive though they chase each other occasionally. But just as other fish species they eat their eggs and other small fish if kept together in the aquarium.

If you prefer to keep them in a tank, make sure it is deep, wide and with a tight lid. This is because they are great swimmers and can jump high too.

The eggs are hatched and two or three days. If not well protected, they eat them up.

Search the Web for More information on Danio Fish at LookSeek.com Search