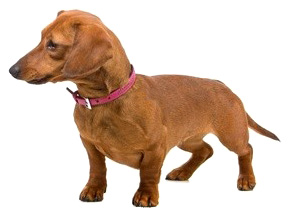 Facts about Dachshund Dogs (German Dog), "Scientific name for Dachshund Dog, or domestic canine, is Canis lupus familiaris". One of the most popular dog breeds in America is Dachshund. Dachshund Dog is normally described as a dog-and-a-half long and a half-dog dog breed. These long backed and short legged dogs are always willingly ready to hunt badgers and are recklessly bold and brave by nature.
In 2008 the Dachshund Dog breed was declared as the most aggressive of all dog breeds in a study held by the science journal Applied Animal Behavior.
Though by nature Dachshund Dogs are fun loving and active dogs but still they are hard to tame due to their energetic and stubborn nature. For this reason most of the families especially with children rarely like them as pet.

Dachshund Dogs usually bark loud on suspected strangers as they are over cautious about them. Dachshund Dogs are so sensitive that they also suspect the blowing of leaves across the lawn and bark loudly. You can not leave them alone in the outdoors or yard due to their barking tendency with slightest provocation.
The Dachshund Dog fearlessly follow the prey in their underground tunnels and burrows that is why they are considered inferior than other dog breeds. These features of Dachshund dogs are enough to prove their character of eager digger along with their aggressiveness and stubborn nature.

Smooth, wirehaired and longhaired are the three types of coats normally dachshund Dogs have. All of these coats have various types of colors and marks on them including spotted and solid colors with white marks. The variety of colors and patterns on Dachshund Dogs may also include solid colors like cream, black, chocolate, brindle and red. The light colored contrasting spots on a dark colored base on their coat, dapple pattern, give a unique look to it.
If a Dachshund Dog is brought up with kids it can prove to be a good family dog. But you should be alert while children play with them as they can be aggressive if they hold them incorrectly. Dachshund Dog can adjust with singles, young couples and seniors equally due to their need of moderate exercise and adaptable nature.
Dachshund Dogs are also considered as a superior watchdog due to their qualities of deep and big bark and extra alertness.

In order to avoid any harm to dachshund’s back while jumping on or from bed or sofa you should arrange for steps or ramps beside your furniture to let them climb and get down easily.
Moreover you should hold Dachshund Dogs correctly from the back to avoid any harm to it. You should hold them in horizontal position after tucking one arm beneath their rear end and other under his chest near front legs.
After knowing all these facts about Dachshund Dog you can easily decide whether you want to keep it as your pet in your home or not as you will have to be careful all the time, if you have kids in your home.
When purchasing a dachshund dog from a breeder, make sure to find a good breeder with references, check at least two to three of the puppies that were purchased from this breeder. Dachshund Dogs sweat glands are between their paw pads.
A Dachshund Dog sees in color and have better low light vision. Dachshund Dogs have three eyelids, a lower lid, an upper eyelid lid and a third lid, that is called a haw or nictitating membrane, this keeps the dogs eye protected and moist. Dachshund Dogs eyes have a special membrane for seeing better at night, called a tapetum lucidum - a dogs reflective layer in the choroid chiefly of nocturnal, causing the eyes to glow when light at night hits the eyes and they consist of some layers of smooth flat cells covered by a section of double deformed crystals

The number one heath problems amongst Dachshund Dogs is obesity, so always make sure your dog doesn't get to fat. Many foot problems that dogs have are just an issue of long toenails. Inportant facts, Dachshunds are prone to spinal disc problems, (IVDD) Intervertebral Disc Disease and when the Dachshund gets this paralysis, it is important to get the operation as soon as possible. If you get this operation within 24 hours the cure rate is very good and also up to 48 hour still has a good percentage of recovery. After the 48 hours the recovery percentage rate starts to really drop. So see your veterinarian as soon as possible and make sure you take the vets advice, but being knowledgeable, is always to your advantage. Also Prone to mast cell tumors, problems, heart disease, urinary tract and diabetes.

In 1885 the Dachshund was recognized by the (AKC) American Kennel Club.
In the early 1600s, the Dachshund originated from Germany.

A Dachshund Dog’s mouth can apply approximately 150 to 200 pounds of pressure per square inch and an American Pit Bull Terrier, German Shepherd Dog and a rottweiler can have 320 LBS of pressure on avg.