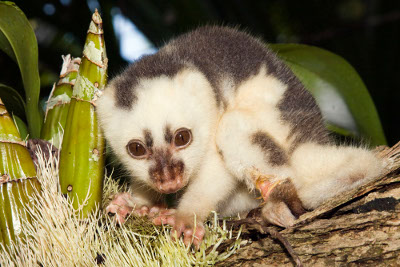 Facts about Cuscus "Scientific name for Cuscus is phalanger". The Cuscus is a large marsupial commonly found in the Northern forest of Australia, New Guinea, and the tropical island of Papua. It is a subspecies of possum and is the largest of the possum species.

In size, the Cuscus will range from 6 to 23 1/2 inches (15 to 60 cm) in length; though the average one can be about 17 3/4 inches (45 cm). cuscuses have small ears and quite large eyes which aid them in their nocturnal lifestyle. The Cuscus have a long and strong prehensile tail that has no fur at the end. This physical feature makes the mammal able to grip the branches more firmly when moving from trees to trees and also when resting.

The Cuscus has thick and wooly far that varies in color including white, brown and tan.

Cuscus is an arboreal animal and will spend much of their life time in the trees. They will spend most of the day sleeping on the trees with dense foliage, and will awaken at night and move through the trees searching for food.

It is an elusive yet secretive animal that is extremely tricky to spot in the wild. Spotting a Cuscus in its natural habitat is stated to be among the most rewarding sights.

Apparently the Cuscus is an omnivorous animal, though they mostly feed on tree leaves and fruits and will occasionally feed on small birds or reptiles.

It is thought to breed all though the year rather than just sticking to a specific breeding season. The female will give birth to 2 – 4 babies. The mother like all marsupials has a pouch on the tummy which the baby crawls into and stays until it is able to take care of itself. And normally only one baby will survive and emerge probably after 6 – 7 months.

Their biggest predator is humans, as they are hunted for both their meat and thick fur.

Search the Web for More information on Cuscus at LookSeek.com Search