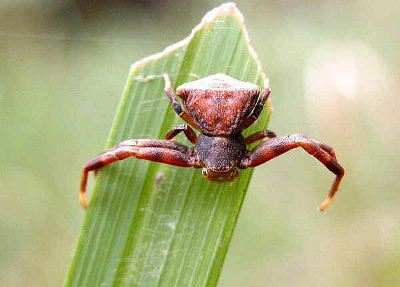 Facts about Crab Spider, "Scientific name for Crab Spider is Sidymella". The Crab Spider gets its name from its crab-like appearance. The name usually refers to spiders in the Thomisidae family, though it is sometimes applied to the Gasternacantha canciformis orb weaving spider and Selenopidae or wall crab spiders.
The North American crab spider family Thomisidae, the one most commonly called the crab spider, was first identified by Sundevall in 1833. That family of species is part of the super family Thomisoidea.
The Crab Spider name comes from the way the four front legs, which are thick and brown like a crab, splay out. The front legs are larger than the back four legs. They can walk forward and even backwards in a manner similar to a crab. Crab spiders even wave their front legs in a show of aggression if provoked, like crabs from the ocean.
They are about a tenth of an inch to half an inch long. Crab spiders vary in color from white to pale yellow to green. They can change their color somewhat to match the background, though they cannot generate patterns like a chameleon. If you take a crab spider off a brown leaf and put it on a green one, it will change from yellow to green.
The Crab Spider doesn’t build a web like most spiders. Instead, they wait in one spot, waiting for dinner to arrive, catching it with their front legs. They are often found on flowers, though they may wait on the ground as well.
Crab spiders can produce silk. They may use it to climb down from a flower or create egg sacks.

The muscles in a Crab Spiders legs pull them inward, but the Crab Spider can't extend its legs outward. It will pump a watery liquid into its legs that pushes them out. A Crab Spider’s legs and body are covered with lots of hair and these hairs are water-repellent, which trap a thin layer of air around the body so the Crab Spiders body doesn't get wet. It allows them to float, this is how some spiders can survive under water for hours. A Crab Spider feels its prey with chemo sensitive hairs on its legs and than feels if the prey is edible. The leg hair picks up smells and vibrations from the air. There are at minimum, two small claws that are at the end of the legs. Each Crab Spiders leg has six joints, giving the Crab Spider 48 leg joints. The Crab Spider’s body has oil on it, so the spider doesn't stick to it’s own web.
Crab spiders are native to North America. The Crab Spiders are not poisonous. They are only a threat to the bees and other flying insects they catch. The only caveat here is that six eyed crab spiders, sometimes called crab spiders, are venomous. The six eyed crab spider is a cousin of the brown recluse spider, and its bites can be dangerous.

Crab Spiders have two body parts, the front part of the body is called the Cephalothorax-(the thorax and fused head of spiders). Also on this part of the body is the Crab Spider’s gland that makes the poison and the stomach, fangs, mouth, legs, eyes and brain. Crab Spiders also have these tiny little leg-type things called (pedipalps) that are next to the fangs. They are used to hold food while the spider bites it. The next part of the Crab Spiders body is the abdomen and the abdomens back end is where there is the spinnerets and where the silk producing glands are located.

A Crab Spiders stomach can only take liquids, so a spider needs to liquefy their food before they eat. They bite on their prey and empty its stomach liquids into the pray which turns it into a soup for them to drink.

A male Crab Spider has two appendages called "pedipalps" a sensory organ, instead of a penis, which is filled with sperm and insert by the male into the female Crab Spider’s reproductive opening.

Crab Spiders do not have a skeletons. They have a hard outer shell called an exoskeleton-(a rigid external covering for the body in some invertebrate animals). The exoskeleton is hard, so it can’t grow with the spider. The young Crab Spiders need to shed their exoskeleton. The Crab Spider has to climb out of the old shell through the cephalothorax. Once out, they must spread themselves out before the new exoskeleton will harden. Now they have some room to grow. They stop growing once they fill this shell. Female Crab Spiders are usually bigger than males.
Female Crab Spiders lay eggs on a bed of silk, which she creates right after mating. Once the female Crab Spider lays her eggs, she will than cover them with more silk.

Crab Spiders have oversize brains.
In the Crab Spider the oxygen is bound to "hemocyanin" a copper-based protein that turns their blood blue, a molecule that contains copper rather than iron. Iron-based hemoglobin in red blood cells turns the blood red

Search the Web for More information on Crab Spider at LookSeek.com Search