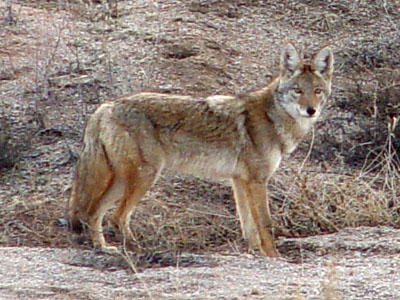 Facts about Coyotes, "Scientific name for Coyote is Canis latrans" The coyote is a North America native. The Eastern coyote or tweed wolf is a mix of Eastern wolves and coyotes. They were first noticed in the 1930s after Eastern wolves had been wiped out, allowing coyotes and their hybrids with the few remaining gray wolves to move in. The Eastern coyote lives around the Great Lakes and northeastern seaboard. The rest of the North American continent from the arctic boundary to Mexico is dominated by Canis latrans. Coyotes share the Pacific northwest with the red wolf, C. rufus.

Because coyotes live in smaller groups and as individuals, they more readily move into settled areas, living off rabbits, rodents and the occasional pet. Coyotes are a canine, and they are a far better fit for living in populated areas than wolves. While the ranges of cougars and bobcats has shrunk in the past 200 years, coyotes have expanded their range from the West to most of the continental United States. While coyotes aren’t known for living in packs, they are starting to hunt deer and caribou now that wolves have been removed from many ecosystems. Coyotes are good jumpers, able to jump over eight foot high fences and even scale twelve foot fences. They will use existing dens of other species or dig their own.

Coyotes range from twenty pounds to fifty pounds in weight. Those living in desert areas are smaller than those living in woodlands and grasslands. Coyotes come in a variety of colors, from tan to gray to brown furn. Some coyotes have white tipped tails. Their tails are held out horizontally when the coyote is in a display of aggression, usually while barking. They only bark when putting on a threat display. All coyotes have a high pitched yipping cry, though they howl like dogs. Coyotes’ sense of smell rivals that of dogs, and they have acute hearing. Coyotes feet have five toes, and they walk with only their toes on the ground.

Coyotes are related to dogs and wolves. There are now coyote-wolf hybrids called Coywolf. A mixture of North American eastern and red wolves, this hybrid species resemble small wolves. They have appeared in the Appalachians, able to hunt larger game like deer in packs while needing less food than wolves and lacking fear of inhabitant areas. Coyotes thrived because they could breed more quickly than wolves and had a more varied diet. Coywolfs have been created in captivity and documented in only a few isolated areas in the wild. Coywolves mature later than coyotes but are larger, and thus more successful in maintaining their territory.

Coydogs are hybrids of domestic dogs and coyotes. Their incidence isn’t fully known but these hybrids are thought to be common due to the prevalence of dogs. Hybrids of the gray wolf and coyotes rarely happen because gray wolves prefer to kill coyotes.

In the mythologies of several Native American tribes, the coyote is the shape-shifter and trickster, akin to Loki in Norse mythology. The coyote entered the body of the god that was eating the other gods before killing him from within, releasing its friends. The scattered parts of that god then turned into the first humans.

Search the Web for More information on Coyote at LookSeek.com Search