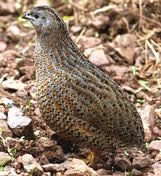 Coturnix is a genus of Old World quail in Phasianidae

They mature faster, produce more eggs, need less food and space, and have more uses than virtually any other kind of domestic poultry or game birds.
The domesticated forms are bred by the thousands for food production and hobby and don't require much more care than chickens.

The breeding age of domestic forms will have adult plumage at six weeks and hens will begin producing eggs shortly after.
With a clutch size from 5 to 9 in the wild and captive birds are known to produce more than a 100 per year.

Rather non-aggressive, it is unlikely that hens will go broody in captivity, artificial incubation will probably be needed, but one may gain success in an aviary. The eggs should be turned a minimum of three times each day.
A turning schedule might be 8:00 a.m., 2:00 p.m. and 10:00 p.m.
A good idea is to mark an X on the side of an egg.
The Coturnix Quail incubation period is 16 to 18 days, forced air incubators temperature 99º to 100ºF with a humidity level of 60%.

Remove from incubator when dry and place in brooder at 99ºF with enough room to move between warm and cooler areas.
Watch for bunching that would indicate it is too cool and watch for signs of excessive heat, reduce heat approx. 5º each week.
Have plenty of water and food, place marbles in water to keep small chicks from drowning.
Clean daily droppings as it can burn feet and cause problems.

The Coturnix Quail mature in six weeks and will began laying eggs at seven weeks old and reach a slaughter weight of 7-8 oz.
Special care must be taken to protect the quail from cold drafts, water and food shortage and dampness.


Some of the domesticated forms include Tuxedo, Pharoah, Golden Manchurian, British Range, Speckled and others.

Search the Web for More information on Coturnix Quail at LookSeek.com Search