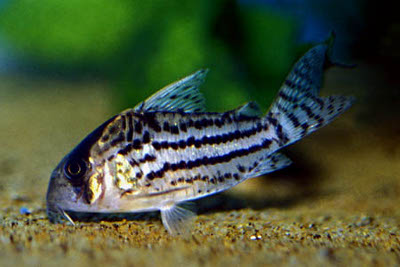 Cory catfish belongs to the family of armored catfish. Also referred to as Cories or Corydorases, these are freshwater temperate and tropical catfish from the larger genus of Neotropical fishes. This genus has more than 142 species.

They portray a wide range of body shapes and coloration. Mainly they are small fish from 25 to 120mm.

Generally Cory is found in small streams that form along large rivers. The fish prefers streams that are slow moving or almost stagnant. In fact most of these small streams are shallow and clear. On the other hand, the streams have plantations which make them dense and this is a suitable habitat for Cory. The water should be soft, neutral to slightly alkaline or acidity.

Some fish are believed to tolerate small amount of salt and other don’t. The pH should be between five and ten degrees Celsius.

Most species of the catfishes are nocturnal, but the Corydoras are very active during the day. They prefer to stay in groups and they can group themselves in a group of hundred of the same species. But in some other instances, they can mix with other species.

The Cory main food is vegetables, insects, insects’ larvae and worms. They can also feed on flesh from dead fish though they are not piscivorous. The sensory barbels help them search for food deep from the bottom of the streams and suck using their mouth. This is why in cases that you are rearing them in a tank; it is advisable to use a soft sand substrate.

The Cory reproduces through a form of insemination. The female drinks the sperms from the male by dipping its mouth in the male genital opening. This way the sperms go through to the female’s intestines. After that, they are discharged with the eggs to a pouch. The pouch is normally formed by the female’s pelvic fins and later it swims and deposits the pouch.

Generally when attacked they are believed to stay still and don’t show any aggressiveness.


Search the Web for More information on Cory Catfish at LookSeek.com Search