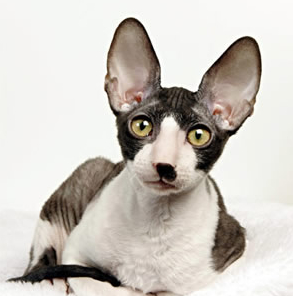 The Cornish Rex Cat has an impressive personality. and doesn’t stay reserved at all. The Cornish Rex Cat likes to participate in things, gets itself involved in almost everything happening in its surrounding and thrives on attention. The intelligent, acrobatic and clownish Cornish Rex Cat retains its kitten-like behavior even in its adulthood. Cornish Rex Cat is a lively and energetic breed. Cornish Rex Cat plays with itself for hours. Sometimes watching it so submerged within self is quite a pleasant scene.

One of the mostly seen behavior of Cornish Rex Cat is to fetch, like a dog. The Cornish Rex Cat retrieves toys. When the kitten learns the game and there is no one around to through a toy, it throws the toys itself by using its front two paws as hands.

Cornish Rex Cat is advised to have them in pairs if the owner works long hours. It expresses itself by patting on the cheek, kissing on neck and turning back & flipping the tail.

Cornish Rex Cat doesn’t have guard hair in its coat. Cornish Rex Cat has an incredibly soft and silky texture. Females weigh 5 to 7 pounds (2.2 to 3.1 kg) and males weigh 8 to 10 pounds (3.6 to 4.5 kg). It tends to have greasy ear and toes, so a little grooming might be required at times.

There are over 500 million domestic cats in the world and 88 million in the United States Approximately 40,000 people are bitten by cats in the U.S. annually. Cornish Rex Cats on average sleep 13 to 14 hours a day and when they are awake, the spend a lot of time liking themselves to keep themselves clean. Cornish Rex Cats help control rodents like small rats and mice where the live homes, warehouse, ect.

A female cat is called a "queen or molly", male cat is called a "tom" and the name "clowder" is called a group and young or baby cats are called kittens. Cornish Rex Cats have very sharp hearing and their sense of smell is fantastic. Cornish Rex Cats average life span is around 12 to 15 years. The reason why Cornish Rex Cats can squeeze through very small spaces is that they have no collarbone and free-floating clavicle bones that their shoulders are attach to their forelimbs, that's why a cat can fit through a hole the same size as its head and they use their whiskers to determine if they can fit through the space.

The cat's hairball is called a "bezoar" (meaning a concretion or calculus found in the intestines or stomach of certain animals, in particular ruminants, formerly alleged to be an effective cure for poison). A Cornish Rex Cat can climb up a tree well but can not climb head first down a tree, because all the claws on a cat’s paw points the same direction, to get down from a tree, a cat has to back down. A Cornish Rex Cat can run at a top speed of about 30 mph (48.2 km) over a short distance. A Cornish Rex Cat rubs against a person to not only to be affectionate but also to mark out its territory. A Cornish Rex Cat does not like water because its fur is not insulate it well when it gets wet. A cat averages about 12 whiskers on both side of its face. A Cornish Rex Cats jaw can not move sideways, there for a cat can not chew large pieces of food. A Cornish Rex Cats back is highly flexible because of its 53 loosely fitting vertebrae. The body of a Cornish Rex Cat has 230 bones. While a human body has 206. Compared to a humans who only have 34.

Search the Web for More information on Cornish Rex Cat at LookSeek.com Search