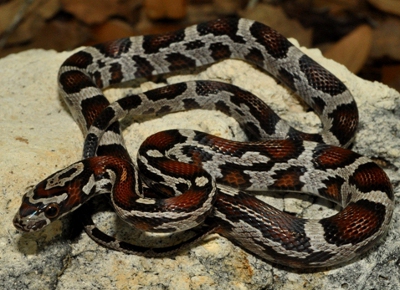 Facts about Corn Snakes. "Scientific name for Corn Snake is Elaphe guttata guttata". Another name for the Corn Snake is the Red Rat Snake. A Corn Snake may live from 15 to 22 years in the wild. The Corn snake resides mostly in North America. In North America, Corn snakes are found from southern New Jersey to Virginia, with their main range from North Carolina to Florida Keys and Texas and west to eastern Louisiana and southern Tennessee. Warm weather is where they like to live. The Corn Snake tend to live around old houses, farms, old garages and they enjoy trees. The Corn Snake are mainly ground snakes but they have no problems with climbing rocks and trees. This snake is a constrictor type, the definition is a snake wraps its body around what it wants to eat or can be a threat. Corn snakes will use their body to firmly constrict the prey until it stops breathing. Corn snakes are slender with a length of 24 to 74 inches (61 to 190 cm). They are called the Corn snake, because they are often found around corn fields.
Corn snakes blend in well to their surroundings, they have patterns of colors for this purpose. Common colors are usually brownish-yellow or orange, with large, black bordered red blotches, down the center of their back. On the belly are alternating rows of black and white marks, resembling a chess board pattern. The Corn Snake come in many different colors depending on what region they live in.
The Corn Snake hibernate were it's very cold in the winters. In many regions they will semi-hibernate were the winters are cooler then the summers. When a few warm days arrive again they will be out again.
Almost all of the food for the Corn Snake comes from rodents such as rats, mice, bats and birds. Young hatch snakes prefer to feed on tree frogs and lizards.
As soon as the winter weather is over and the warmer temperatures arrive, the females will start giving off a strong smell, this will entice the males to seek out females for mating. The breeding season of corn snakes is from May to June. Corn snake females will lay her eggs about 1 month after mating has taken place. The snakes are oviparous, depositing 10 to 35 eggs. Eggs are laid in a place that are warm and moist for them to be incubated such as mounds of decaying vegetation, rotting stumps, or other similar locations where there is sufficient heat and humidity. The female Corn Snake does not care for the eggs once they are laid. The gestation period at about 82° F of the eggs for about 60 to 65 days. New hatched Corn Snakes are 10 to 15 inches (25 to 38 cm) and mature in 20 to 36 months.

Search the Web for More information on Corn Snake at LookSeek.com Search