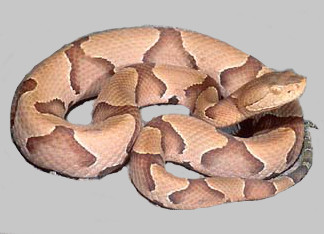 Facts about Copperhead Snakes. "Scientific name for Copperhead Snake is Agkistron contortrix". The American Copperhead is in the category of venom's snake. An adult Copperhead Snake grows to a body length of between 25 to 36 inches (). The males of the copperhead snake, are longer than the females. When the Copperhead Snake are born their body length is about 8 to 10 inches (). Their Breeding period is from February to April or August to October. They have about 4 to 10 live young per year. Some times the Copperhead Snake are called Moccasin Snake. Northern Virginia's only venomous snake is the Copperhead, But close near by in Blue Ridge Mountains is the Timber Rattlesnake, and in the swamps south of Richmond lives Cottonmouth snake.
The Copperhead Snake overall range is the Eastern United States, from southern New England, New York, New Jersey, Connecticut, and Massachusetts then go west through southern Pennsylvania, Ohio, Illinois and Indiana, and southward in the upper interior to northern Alabama, Oklahoma, Kansas, Missouri, Arkansas, Louisiana, Mississippi, Alabama and also other states such as Georgia, Florida, North Carolina, Tennessee, Kentucky, Iowa, Maryland, Delaware, Virginia, Georgia South Carolina and Georgia and as far down a Texas.
The Copperhead Snake, looks like somebody spilled coffee on its body. The arrow shaped head connected to the body. The color of the Copperhead Snake body is tan to dark tan depending on what part of the country, this camouflages them easily in the environment they are in.
American Copperhead are primarily a nocturnal (night creature) reptile. When it gets colder out, they start to come out during the day for warmth. They are cold blooded so they need the warmer temperatures.
The Copperhead Snake like to keep company with their own kind, you may even find them living together in a log pile under a big rock and also hibernate together. The Copperhead Snake have been known to keep company with the Black Rat Snake in some areas. When the warmer weather comes they will disperse after hibernating with each other.
The Copperhead Snake eat frogs, salamanders, toads, birds, crickets, lizards, and much more food to survive in the wild. The Copperhead Snake are very patient to get their pray, they stay very still for long periods of time, for their pray to come by and get within striking range. Rodents are very often consumed and they are typically found on the ground but they will also climb trees to get their pray.
The predators that will eat the American Copperhead Snake, such as various types of birds including Hawks and Owls, rodents such as Raccoon, opossum, fox and a snapping turtle and Northern Ringed Neck Snake will often feed on them. As the snakes become larger there less of a risk that such predators eating them.

Search the Web for More information on Copperhead Snake at LookSeek.com Search