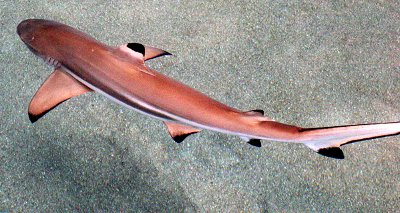 Facts about Copper Shark, "Scientific name for Copper Shark is Carcharhinus brachyurus". The Copper Shark is a coastal species belonging to the family Carcharhinidae. This is the same family in which tiger sharks belong. It has the capacity to grow up to 11 feet 5 inches (3.5 meters) in length. The Copper Shark has many names such as Cocktail shark, Narrowtooth shark, Bronze Whaler, New Zealand Whaler. It is alternatively referred to as the New Zealand whaler, cocktail shark, bronze shark, bronze whaler and narrowtooth shark.

As opposed to the other members in the genus, the Copper Shark is distinct in appearance. It has narrow and hook-shaped upper teeth. It also has no bridge between its dorsal fins. It is torpedo-shaped with a back that is bronze colored and a white belly. Along the edges of its fins, you can easily see some conspicuous dark marking and white tips. The Copper Shark genus name Carcharhinus is Greek for sharp nose, a fine description for this long, torpedo-shaped fish.

In terms of weight, the heaviest known copper shark measures 671 1/2 pounds (304.6 kg). The Copper Shark also have a lifespan that goes up to 30 years.

The copper shark is mostly found in deep subtropical and warm temperate waters. It is one of the shark species that can live comfortably in many places around the world. The Copper Shark can also inhabit shallow waters and it has been spotted in harbors, rivers, large bays and surf zones. Ranging from Australia, Mediterranean, Gulf of Mexico, Argentina all the way to Africa, copper sharks have managed to adapt to different marine conditions.

The copper sharks are sensitive to vibrations and electro-conductivity. They use these sensations to locate and pounce on their prey. The Copper Shark mostly feeds on bony fish, cephalopods such as octopus and squid and also small sharks.

The copper sharks breed in temperate waters. The mating period starts in October and runs all the way to December. The Copper Shark are viviparous meaning the embryo develops inside the mother’s body. The female Copper Shark give birth as from June to January following a 12 to 21 month gestation period. Their litters contain anything between 7 and 24 pups measuring approximately 23 1/2 inches (60 cm) in length.

There are over 400 types of sharks, Sharks have the most powerful jaws on on earth. Copper Sharks jaws, both the upper and lower jaws move. Copper Sharks skin is made of denticles instead of scales like other fish. The denticles are constructed like hard, sharp teeth (tooth-like projection) and this helps to protect the Copper Shark from being injury. The Copper Shark is carnivores meaning: an animal that feeds on flesh (Meat).

Search the Web for More information on Copper Shark at LookSeek.com Search