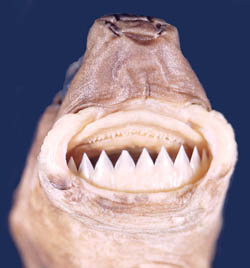 
Physical Appearance, Body Size and Weight
The males are smaller compared to the females with adult males growing up to 16 1/2 inches (42 cm) in length while the females mature at 22 inches (56 cm). the Cookiecutter Sharks have some of the largest teeth which it uses to feed on large chunks of its prey. Sharks have the most powerful jaws on on earth. Cookiecutter Sharks jaws, both the upper and lower jaws move. The lower surface of the body is bioluminescent and endowed with the unique ability of emitting a greenish glow. It attracts its prey via the tiny light producing organs known as photophores.

The Cookiecutter Shark can be found in tropical and temperate waters of the Atlantic and Pacific Oceans. Also, it has been severally located in proximity to islands because of the fact that these areas have a huge concentration of prey and form one of the best mating grounds. In terms of ocean depth, their typical habitats are in deep waters of around 3,281 feet but some of them can go up to a depth of 3.7 km.

This shark feeds on both small and large fish such as tuna and marlin. It is also known to feed on other small sharks and marine mammals such as whales and seals. Included in the diet of Cookiecutter Shark is cephalopods such as squids and at times they feed on crustaceans. The Cookiecutter Shark is carnivores meaning: an animal that feeds on flesh (Meat).

This species is also ovoviviparous with the embryos developing inside the mother for a period of 12 to 22 months. Each litter contains approximately 6 to 12 live pups and by the time of their birth, they are usually fully developed.

There are over 400 types of sharks, Cookiecutter Sharks skin is made of denticles instead of scales like other fish. The denticles are constructed like hard, sharp teeth (tooth-like projection) and this helps to protect the Cookiecutter Shark from being injury.

Search the Web for More information on Cookiecutter Shark at LookSeek.com Search