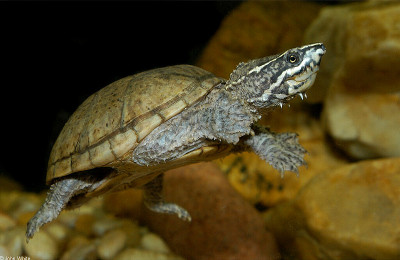 Common Musk turtles are small in nature. They are found in black, grey, or brown colors. The Common Musk turtle average weight is around 1 1/2 pound (603 grams) and can grows up to 5 1/2 (14 cm long). Male Common Musk turtles will usually mature in only about 3 years, while females take from 4 to 7 years to mature. Their necks are long and their legs are short. On the necks you will see yellow lines that are visible especially when they are swimming.

When the fall colder weather has arrived and the water temperature drops below 50 degrees Fahrenheit (10 cel), a Common Musk turtles heads to their hibernation place beneath the mud, where they will be safe from the impending freezing temperatures. After this time of the winter dormancy, in the spring, is when you will see the Common Musk turtles again. They can be found again, climbing a log, basking in shallow water or on top of rock sticking out of the water. The Common Musk turtles can climb high up into the branches of trees.

The head of the Common Musk turtle is triangular with a pointed snout and a sharp beak. From the tip of the nose to the neck there is a yellow green stripe. The chin and throat have barbels. The Common Musk turtle tongues are tiny and covered with bud-like papillae that aid the ability to get oxygen from water.

Common musk turtles spend most of their time in shallow vegetated slow moving waters and ponds. The time they come to land is either to bask or when females are laying eggs. The Common Musk turtle also climb to trees that have submerged in water and when the boats are passing underneath they jump in. Most people identify them by this character.

The Common Musk turtles are carnivorous. They mostly consume a wide variety of invertebrates. These include; snails, crayfish, worms, aquatic larvae, tadpoles and insects. For hatchlings, it is important to make sure that they feed on more carnivorous diets than the adults for proper growth. If the wild turtles are threatened, they can bite as a way of defending themselves. So when handling them one should be very careful.

Common musk turtles breeding season, occurs in the spring. Mating takes place when the male gets on top of the female underwater. The season Mating takes place from April through early May. Female Common Musk turtles will leave the water to nest up to 3 times during May to June. Nest cavities are dug near the water’s edge, often under a log, tree stump, or leaf litter. Approximately 5 to 8 eggs are laid in the cavity at a time and covered up, The eggs also have hard shell. The Common Musk turtles have a habit of sharing their nests and in most cases you may find more than one nest under a log. Mostly the eggs don’t hatch because they are eaten by predators. Hatch-lings emerge in late summer to October. Hatch-lings are around 1 inch (2.5 cm) long.

Common Musk turtles found generally in the eastern United States. They may be found from New Hampshire and southern Maine and go west through Vermont, than into southern Ontario. Than go south all they way down to Florida. Than go west to Wisconsin, Kansas, Iowa, and eastern Oklahoma and Texas. The common musk turtle lives for a very long time, while in captivity these turtles can live up to 50 years or more. If the Common Musk turtle are being kept as pets their diet should not contain high proteins, this may cause a vitamin A and E deficiencies. The owner should supplement their diet with a cuttle bone and calcium diet.

Good ultra violet lighting is also essential and a good basking area is necessary in the Common Musk turtle tank.

Search the Web for More information on Common Musk Turtle at LookSeek.com Search