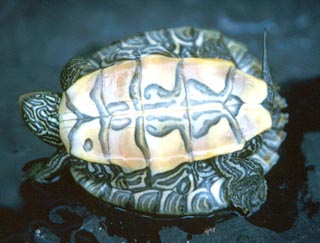 The older Common Map turtles carapace markings fades and can be visible only when the carapace is wet. This is because of the dark pigment. The carapace is broad with a moderate low keel. The plastrons of adults are plain yellow in color. The head, neck and limbs of the Common Map turtle are black, brown or dark olive with yellow or green stripes. Behind the eyes you will notice that they have an oval spot.

The sizes of common map turtles differ according to their sexes. The females are larger than the males. The male Common Map turtle have more distinctive keels, narrow heads, long front claws and thick tails. Their carapace is also more oval than that of the females. Their vent opens up beyond the edge but for the females the vent opens up fully.

The young ones are also a bit different. Their plastron consists of dark lines. The dorsal keel is more pronounced. The hatch-lings have a grayish brown carapace which is around 1 inch (2.54 cm) long. The pattern has light circular markings and the stripes on the head and limbs resemble those of the adults.

Common map turtles mostly inhabit lakes, ponds and rivers. But they like rivers than the ponds and lakes. The Common Map turtle prefer large bodies of water especially the areas that have fallen trees to give them good basking space.

The Common Map turtle absorb their oxygen from the water which is a common characteristic among all common turtles. This oxygen helps them to survive through winter because in this season they mostly stay in water and the ice makes it hard for them to breath. The Common Map turtle stay dormant from November to early April though this entirely depends on the local climatic factors.

Common map turtles breeding start in the spring and fall. Mating takes place in deep waters and nesting lasts from May to July. The females deposit the eggs in well drained places especially on the sandy soils. The eggs are oval and about 1 1/4 inches (3.2 cm) long with a flexible shell. They dig a nest cavity using their hind legs and when the eggs are laid the cavity is filled.

Their feeding program also takes place in water and they are carnivorous. The Common Map turtle mostly feed on mollusks, insects and crayfish. Since the females have wider heads and broad alveolar crushing surfaces in their mouths, they feed on larger prey than the males.

Search the Web for More information on Common Map Turtle at LookSeek.com Search